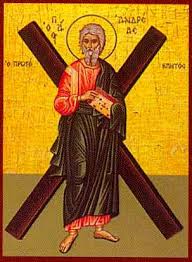 Collect of the Day:
Almighty God, by Your grace the apostle Andrew obeyed the call of Your Son to be a disciple.  Grant us also to follow the same Lord Jesus Christ in heart and life, who lives and reigns with You and the Holy Spirit, one God, now and forever.
Posted by Surburg's blog at 5:30 AM