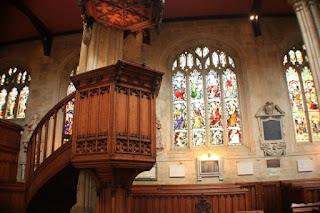 When I wrote the blog post What is soft antinomianism?, I encountered the rather interesting response that such a thing does not exist.  Some said that soft antinomianism is no more real than unicorns. There were those who said, “Where’s the proof?  Show us sermons!”

Now the problem with sermons is that there are many variables that go into an individual sermon such as the text, the circumstances in the congregation, and the pastor’s week (every pastor has written a sermon was probably less than his best when short on time because of pastoral care concerns during the week!).  In addition, a sermon is just one sermon.  You would need a large number of sermons to demonstrate soft antinomianism, since of course, this describes a lack of preaching about new obedience and good works. And even if you did show this in one pastor, it would still be only one pastor.

It is more useful to examine what pastors have to say about how preaching should be done, for here you have the assumptions and beliefs behind their preaching set out in the open.  Again, one could argue that a large number of samples would be needed to demonstrate the case that soft antinomianism exists.  But as I looked online yesterday, I was struck by the fact that examining how a prominent and influential pastor discusses preaching can provide important and useful evidence to demonstrate the existence of soft antinomianism.

The thought occurred to me as I read Pastor Donavon Riley’s post Just Another Law-Gospel Sermon?  Pastor Riley is an excellent writer and a prolific blogger.  He has often been a featured speaker and writer at Higher Things.  To his credit, Pastor Riley’s thought is very consistent and developed.  You don’t have to read very much of his writing to recognize the points he is driving home in a well honed fashion.


Soft antinomianism is an inability and even a refusal to preach about new obedience and good works.  It does not exhort, admonish and teach in sermons about how Christians are to live because of what Christ has done for us.


When soft antinomianism controls preaching, the sermon has only two goals.  First, the preacher seeks to address sharp, accusatory Law that will convict the hearers of their sin and prompt repentance.  This is done in service of the second and main goal, which is to deliver the forgiveness found in Jesus Christ. The preaching of the Law prepares the hearer for the preaching of Jesus and the Gospel.  In that movement from Law to Gospel the sermon has achieved its entire purpose.  What soft antinomianism does not have as a goal in preaching is to guide and direct Christians in how they are to live because of Christ and the Gospel.


In my second post in the series, The elephant in the Room – Presuppositions of soft antinomianism, I wrote:


The second presupposition of soft antinomianism is that the Law always accuses, and that in accusing it does only one thing – it shows people their sin. The fact that the Law always accuses (lex semper accusat) is a basic truth of confessional Lutheran theology.  Apology  IV.38 explicitly states, “For the law always accuses and terrifies consciences” (Ap. IV.38).  All statements about how Christians are to live are inherently Law – they tell people what they are to do.  From the perspective of soft antinomianism such preaching can only do only one thing.  It will convict people of the fact that they do not do these things.
Since the Law always accuses and shows people that they can’t do, any attempt to exhort or admonish Christian about new obedience and good works can only lead people into the twin ditches of legalism: despair or works righteousness.  There is no way in which the Law can assist the individual Christian to do things that are right and avoid things that are wrong.  Soft antinomianism maintains that to suggest such a thing (as I will) contradicts a basic truth of the Lutheran confession and ultimately denies the Gospel since only the Holy Spirit can produce these things in a Christian.


When one examines Pastor Riley’s explanation of what a sermon is and does, it soon becomes clear that this perfectly matches my definition of soft antinomianism.  First Pastor Riley clearly indicates that the sermon does not in any way have the goal to exhort, admonish and teach about how Christians are to live because of what Christ has done for us. Rather all attempt to talk about what Christians do is rejected. So in the first paragraph any movement towards talking about Christians and what they do is attributed to a diminishment of justification.  Riley reports how he unfortunately did not believe his professor when he said:

The false answers to the challenge of preaching that Pastor Riley then lists share in common the feature that they all in some way deal with what Christians do and how they live:


But I wasn't preaching Law-Gospel sermons. My professor’s warning had been right on. I’d given into temptation. I preached what I imagined the congregation needed to hear or what they demanded to hear. I even sought the advice of pastors and preaching gurus who explained to me that there were ways to read the Bible and preach other than just the Law-Gospel formula. Some said I needed to focus more on how Christians are to live in the world as Christians. Others urged me to emphasize evangelism and the mission the church more often. Still others told me I needed to emphasize Christ as example for Christians to imitate. (emphasis added)

Pastor Riley goes on to say: “The congregation isn’t free to demand the pastor turn his attention to their favorite subject - which is always themselves - either.”  Sermons that talk about what Christians are to do and how they are to live serve the ego of fallen sinners.  Near the end of the piece, Riley delivers some of the sharpest rebuke to any notion that the sermon should have as a goal to exhort, admonish and teach about how Christians are to live because of what Christ has done for us when he writes:


Instead of the preacher’s tales of spiritual victory or his exhortation to the congregation to turn their attention toward moral reform, God’s Word announces “God’s fulfilling of his own law in Christ and the freedom which is now given the Christian in Christ” (David Scaer, On Law And Gospel As A Homiletical Device). (emphasis added)

On the contrary, the sermon is to have only two things – Law and Gospel.  But Riley defines the function of the Law (its “use” as we call it) in a singular fashion.  He says that, “In a Christian sermon the hearer is cracked wide open by God’s Word of Law and pieced back together by the Gospel” (emphasis added).  The Law is something that cracks the hearer wide open.   It does this because, “God’s preacher declares to His hearers that they’ve failed to do what God’s Law demands of them.” This is sharp, accusatory Law that convicts people of sin.

Once the Law has done this, the hearer is then “pieced back together by the Gospel.”  In a clear articulation of the Gospel, Riley writes:


Instead of the preacher’s tales of spiritual victory or his exhortation to the congregation to turn their attention toward moral reform, God’s Word announces “God’s fulfilling of his own law in Christ and the freedom which is now given the Christian in Christ” (David Scaer, On Law And Gospel As A Homiletical Device). All the Bible has to say about the Law’s requirements, demands, and penalties have been satisfied by God’s Son, Jesus Christ. The Old Covenant has been annulled. The New Testament invites all to come, receive their inheritance. Spiritual and moral failures are made heirs of the kingdom of God. Sinners are welcomed to the Lamb’s feast.

Hearers are confronted with the fact that “they've failed to do what God’s Law demands of them. God’s Word of Gospel then announces that these same people are now accepted by God for Christ’s sake.”  And that’s it.  There is nothing more to do.  Riley ends his piece by saying:


The biblical text that is preached is either Law - what hinders the deliverance of all God’s promises in Christ Jesus - or it is Gospel- what gives Christ Jesus and his gifts. There is no other method. No better way to interpret or preach Scripture. There’s God’s Word of Law and the Gospel. What is preached is one or the other. That’s it. There are no more options.

Riley is certainly correct when he writes, “God’s Word announces ‘God’s fulfilling of his own law in Christ and the freedom which is now given the Christian in Christ’ (David Scaer, On Law And Gospel As A Homiletical Device).”  But that is where he stops.  There is nothing of the apostle Paul’s understanding that because the Christian is in Christ through the work of the Spirit, the Christian begins to fulfill the law through love.  There is nothing of his exhortation to live in this way. Paul writes in Galatians, that letter that so greatly influenced Luther because of its focus on justification: “For in Christ Jesus neither circumcision nor uncircumcision counts for anything, but only faith working through love” (Galatians 5:6 ESV). Then shortly thereafter in words that clearly pick up on 5:6, Paul writes, “For you were called to freedom, brothers. Only do not use your freedom as an opportunity for the flesh, but through love serve one another. For the whole law is fulfilled in one word: 'You shall love your neighbor as yourself'" (Galatians 5:13-14 ESV).

Paul expresses the same thought in that other letter dominated by justification, Romans:

This biblical manner of speaking is precisely what soft antinomianism avoids and rejects.  Exactly as Pastor Riley explains, it does not exhort, admonish and teach in sermons about how Christians are to live because of what Christ has done for us (because we are in Christ).  Just as we find in Riley’s piece, soft antinomianism operates with an understanding of the Law that assumes it only does one thing as it accuses – it shows people their sin.  Exactly as Riley describes, in soft antinomianism the sermon seeks only to move from this accusation of the Law which shows sin to the forgiveness and peace found in the Gospel. What Pastor Riley sets forth in his post is soft antinomianism.  What he says is true, insofar as it goes. The error occurs in what he doesn't say, and why he doesn't say it.  It is in these two factors that the great divide exists between the Scriptures and the Lutheran Confessions on the one hand, and Riley's soft antinomianism on the other.