Mark's thoughts: Thomas, the Bill Buckner of the Bible 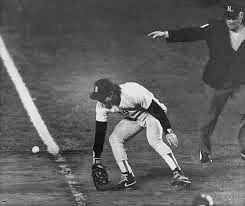 Bill Buckner has gotten a bad rap.  Buckner is remembered as the goat of the 1986 World Series – as the player who “lost” the World Series for the Boston Red Sox when a ground ball went through his legs in the bottom of the tenth inning and allowed the winning run to score for the New York Mets.  This single play has become his legacy to the point that when a sports fan hears someone talk about “pulling a Buckner” – they immediately know it refers to choking in some huge and costly mistake.
However, Buckner has gotten a bad rap on two accounts.  In the first place it ignores the fact that numerous others shared in the Red Sox’s collapse in 1986.  The Red Sox entered the bottom of the tenth inning ahead five to three.  Before Buckner’s famous error, two runs had already scored to tie the game.  These runs had occurred as a result of three consecutive singles with two outs.  The tying run itself scored on a wild pitch.  Before the ball was ever hit to Buckner others had missed opportunities to close out the game.  Many other players shared in the Red Sox collapse that night – not to mention that all of this occurred in game six and not game seven of the World Series as so many people seem to now believe.  The Red Sox as a unit share the blame for going out and losing the next game in order to lose the World Series.
In addition, Buckner has gotten a bad rap because this one play has caused a very fine career to be completely forgotten.  Buckner had a lifetime .289 batting average over 22 seasons.  He won the National League batting title in 1980 while playing with the Chicago Cubs.  His 2700 career hits means that only fifty players in the entire history of the game have had more hits than Buckner.  Bill Buckner was a very good player and it is not right that one play has caused all of this to be forgotten.
In John 20:24-31 we hear the account of Thomas’ encounter with the risen Lord.  The mention of Thomas almost immediately brings to mind the phrase that many of us have used at one time or another: “doubting Thomas.”  Yet like Bill Buckner, Thomas has also gotten a bad rap. This becomes clear when we consider this account in the context of John’s Gospel.