Mark's thoughts: Why do they believe the sacraments are only symbols?: Presuppositions in reading Scripture 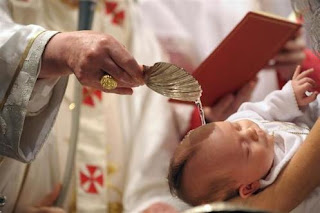 1. The position fits with the creational, incarnational, sacramental and eschatological nature of God’s activity that we find throughout the Bible.  That is to say, it is based on the biblical worldview instead of the dualistic worldview that comes from Greek philosophy.

2. The position provides the easiest reading of the biblical texts that deal with Holy Baptism and the Sacrament of the Altar – “they just say it.”  In Romans 6 Paul says that through Holy Baptism we are buried with Christ into His death.  In the Words of Institution Jesus says that He is giving us His body and blood.  The catholic position does not have to try and explain away what these texts are saying quite clearly.

3. The position provides the least variety in interpretation.  Because the texts “just say it,” the interpretation is very easy and straightforward, and has been so for the catholic tradition for 2000 years.  By contrast, when the Protestant tradition attempts to explain away the biblical statements, they are unable to agree about what the texts mean.  Often they are only able to agree that the biblical texts don’t mean what they seem to be saying.

4. The position is the same one that the catholic (universal) Church has held for 2000 years and has held since the beginning of the Church.  For example, writing in the second century A.D. the church father Irenaeus said of Holy Baptism: “As dry flour cannot be united into a lump of dough, or a loaf, but needs moisture; so we who are many cannot be made one in Christ Jesus without the water which comes from heaven … For our bodies have received the unity which brings us to immortality, by means of the washing; our souls receive it by means of the Spirit” (Adversus Haereses, 4.26.2).  Writing at the beginning of the second century Ignatius the bishop of Antioch wrote about heretics in his area: “They stay away from the Eucharist and prayer, because they do not confess that the Eucharist is the flesh of our Savior Jesus Christ which suffered for our sins, which the Father raised up by His goodness” (To the Smyrnaeans 7.1).  It is a historical fact that prior to the sixteenth century, the Church had always confessed that God works a miracle as He produces a spiritual result through the waters of Holy Baptism and as Christ uses bread and wine to give us His very body and blood.

E. What does this mean?: Eschatology
The recognition of these competing worldviews – the biblical and the dualistic – enables us to better assess how biblical our own eschatology is. The influence of the dualistic worldview in the Christian tradition must not be underestimated.[19]  On occasion, we ourselves hold positions regarding eschatology that have more to do with Plato, Plotinus and Pseudo-Dionysus than Paul.  In our preaching and teaching do we point the hearers to “dying and going to heaven” or do we hold up the biblical hope of the return of Christ, the resurrection of the flesh and the renewal of creation?[20]  After we have recognized these two competing worldviews, we are in a better position to examine our own eschatological views and consider where we may need to modify them in order to bring them into a closer alignment with the presuppositions of Scripture itself.
[1] I have described this in more detail in Mark P. Surburg, “Good Stuff!:  The Material Creation and the Christian Faith,” Concordia Journal 36:3 (2010): 245-262), 246-247).
[2] Diogenes Allen, Philosophy for Understanding Theology (Atlanta: John Knox Press, 1985), 47.
[3] Translation cited from: The Dialogues of Plato, vol. 2 [trans. B. Jowett; New York: Random House, 1937], 12).
[4] Phaedo 80-82; Phaedrus 245c-247c.
[5] Allen, Philosophy for Understanding Theology, 19.
[6] Phaedrus 250c says that the soul is bound in the body like an oyster in its shell.
[7] N.T. Wright, The Resurrection of the Son of  God, vol. 3 of Christian Origins and the Question of God (Minneapolis: Fortress Press, 2003), 48.  In his excellent survey of Greco-Roman beliefs about death and the after-life (32-84), Wright describes this as the “standard philosophers’ view of death” (55).
[8] See Timaeus 29-30 for positive statements about the world.
[9] See the survey in S. Lilla, “Platonism and the Fathers,” vol. 2 of Encyclopedia of the Early Church (ed. Angelo Di Berardino; trans. Adrian Walford; New York: Oxford University Press, 1992), 689-698.
[10] Hermann Sasse, “Word and Sacrament: Preaching and the Lord’s Supper” in We  Confess The Sacraments (trans. Norman Nagel; St. Louis: Concordia Publishing House, 1985), 11-35, 16.
[11] Paul Vincent Spade, A Survey of Medieval Philosophy, 1985 (materials produced by Dr. Spade for graduate Survey of Medieval Philosophy course at Indiana University).
[12] David Knowles, The Evolution of Medieval Thought (2d ed.; ed, D.E. Luscombe and C.N.L. Brooke; London;  Longman, 1988), 167.
[13] Lewis W. Spitz, The Renaissance and Reformation Movements: Volume I The Renaissance (rev. ed.; St. Louis: Concordia Publishing House, 1987), 173.
[14] Spitz, Volume I The Renaissance, 174.
[15] See the discussion in Lewis W. Spitz, The Renaissance and Reformation Movements: Volume II The Reformation (rev. ed.; St. Louis: Concordia Publishing House, 1987), 382-428.
[16] Sasse describes how the Reformed churches in the 16th century produced a revolution, not a reformation (Hermann Sasse, Here We Stand: Nature and Character of the Lutheran Faith [trans. Theodore G. Tappert; Adelaide: Lutheran Publishing House, 1966], 109-110).  A confession that denied Holy Baptism as a means through which God works regeneration or that denied the true body and blood of Christ in the Lord’s Supper was something that had not existed in 1500 years of Christianity.
[17] I have described this “big picture” as creational, incarnational, sacramental and eschatological in the article, “Good Stuff! The Material Creation and the Christian Faith.”
[18] Naturally this includes the sacramental manner in which God used located means in the Old Testament such as the tabernacle/temple and the sacrifices (see Surburg, “Good Stuff!”, 249).
[19] For example, Christians often speak of how Christ and his Church seek “to save souls.”  Now it is true that the Scriptures speak of saving souls such as in 1 Peter 1:9, “obtaining the outcome of your faith, the salvation of your souls.”  Here we need to recognize the unique character of the world “soul.”  As BDAG cautions, “It is oft. impossible to draw hard and fast lines in the use of this multivalent word” (W. Bauer, F.W. Danker, W.F. Arndt, and F.W. Gingrich, Greek-English Lexicon of the New Testament and Other Early Christian Literature [3d ed.; Chicago: University of Chicago Press, 1999], 1098).  Often there is a Semitic understanding of the word at work. So for example the Septuagint translation of Gen. 2:7 says that man became a “living soul” where the passage is describing bodily existence.  The biblical meaning of the word “soul” in 1 Peter 1:9 is very different from the way that the Christian tradition, influenced by the dualistic worldview, has come to use this word. So for example, Calvin writes: “And Christ commending his spirit to the Father, and Stephen his to Christ, intend no other than that, when the soul is liberated from the prison of the flesh, God is its perpetual keeper” [Institutes of the Christian Religion [1559], I, XV, 2; text cited from: John Calvin, Institutes of the Christian Religion [trans. John Allen; Philadelphia: The Westminster Press 1936]).  In our setting, talk about “saving souls” is very likely to be misunderstood and therefore we should use it with great caution.  The Scriptures teach us that Christ does not seek to save souls.  He seeks to save people, who are a unity of body and soul.
[20] See: Jeffrey A. Gibbs, “Regaining Biblical Hope: Restoring the Prominence of the Parousia,” Concordia Journal 27 (2001):310-322; Jeffrey A. Gibbs, “Five Things you Should Not Say at Funerals,” Concordia Journal 29 (2003): 363-366; James Ware, “Paul’s Hope and Ours: Recovering Paul’s Hope of the Renewed Creation” Concordia Journal 35 (2009): 129-139; Surburg, “Good Stuff!”, 245-62.
Posted by Surburg's blog at 11:55 AM