Mark's thoughts: Christ's Church has defended life from the beginning 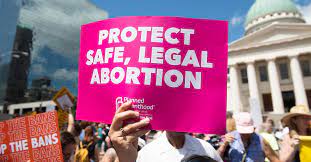 God created human life in his own image (Genesis 1:26-27).  Scripture describes in detail how he uniquely created Adam: “then the LORD God formed the man of dust from the ground and breathed into his nostrils the breath of life, and the man became a living creature” (Genesis 2:7).  It then also describes how God created Eve from Adam as the helper who corresponded to him (Genesis 2:21-22).  God is the Creator, not just in the sense that he first made creation, but also because he is the One who continues to create and sustain creation.  God commanded man to procreate as he told Adam and Eve “be fruitful and multiply” (Genesis 2:28).  Yet Scripture is clear that in doing so, it is God who works through the one flesh union (Genesis 2:4; Matthew 19:4-6) to create life.  The Psalmist writes: “For you formed my inward parts; you knitted me together in my mother's womb. I praise you, for I am fearfully and wonderfully made. Wonderful are your works; my soul knows it very well” (Psalm 139:13-14).

God is the Creator and Giver of life, and so apart from limited circumstances entrusted to his representatives who maintain order (Romans 13:1-4), God is also the only One who determines when life ends.  This is the truth that is expressed in the Fifth Commandment, “You shall not murder.”

We tend to view abortion and the killing of babies as a “modern” practice and issue.  However, nothing could be farther from the truth.  Abortion was practiced in the ancient world, and the Christian Church has always condemned it.  The Didache which is most likely the earliest Christian text outside of the New Testament (late first century A.D. or early second century) says, “You shall not murder a child, whether by abortion or by killing it once it is born” (2:2).  Writing at the end of the second century A.D., Tertullian stated: “In our case, murder being once for all forbidden, we may not destroy even the fetus in the womb, while as yet the human being derives blood from other parts of the body for its sustenance. To hinder a birth is merely a speedier man-killing; nor does it matter whether you take away a life that is born, or destroy one that is coming to the birth” (Apology, 9.8).

Yet in the Greco-Roman world abortion was not the only means by which infants were killed and eliminated.  Infant exposure was a much more common practice as unwanted babies were left on trash heaps or abandoned outside.  There they would die, or would be taken up by others to be raised for slavery and prostitution.  Christianity also strongly condemned this practice. Writing in the mid-second century A.D. Justin Martyr stated, “But as for us, we have been taught that to expose newly-born children is the part of wicked men; and this we have been taught lest we should do any one an injury, and lest we should sin against God” (First Apology 27.1). The Epistle to Diognetus, written in the second or third century A.D. describes Christians in the following manner: “They marry as men, they bear children, but they do not expose their offspring” (6.6).

Christians have always confessed that life is God’s gift.  In the first centuries of the Church, they did so in the face of a world that accepted the practice of killing babies as a normal part of life. When we speak out against abortion, we join our voices to the saints before us who have confessed the sanctity of life because of what God’s Word says.