Commemoration of the Venerable Bede 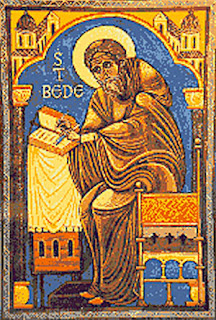 Today we remember and give thanks for the Venerable Bede.  Bede (673-735) was the last of the early church fathers and the first to compile the history of the English church. Born in , Bede was given by his parents to a monastery in at the age of seven. He rarely left the monastery and devoted the rest of his life to teaching and writing. The most learned man of his time, he was a prolific writer of history, whose careful use of sources provided a model for historians in the Middle Ages. Known best for his book, The Ecclesiastical History of the English People, he was also a profound interpreter of Scripture; his commentaries are still fresh today. His most famous disciple, Cuthbert, reported that Bede was working on a translation of John's Gospel into English when death came, and that he died with the words of the Gloria Patri on his lips. He received the title "Venerable" within two generations of his death and is buried in Durham Cathedral as one of 's greatest saints.

Heavenly Father, when he was still a child You called Your servant Bede to devote his life to serve You in the venerable disciplines of theology and scholarship.  As he labored in the Spirit to bring the riches of Your truth to his generation, grant that we may also strive to make You known in all the world in our various vocations; through Your Son, Jesus Christ, our Lord, who lives and reigns with You and the Holy Spirit, one God, now and forever.