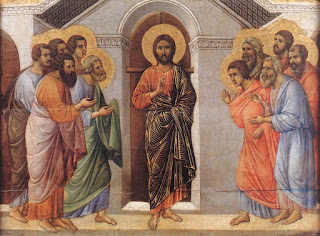 In his book , The Resurrection of the Son of God, the New Testament scholar N.T. Wright observes four surprises that we encounter when we read the resurrection accounts in the Gospels. The first surprise is that the accounts of the resurrection do not contain specific references to Old Testament passages, or even allusions to specific passages.  While the Gospels themselves up to this point are filled with this kind of material, the Easter accounts have none. The closest we come are Jesus’ very general statements in Luke (24:25-27; 44-6) that his suffering, death, and resurrection has fulfilled Moses, the Prophets and the Psalms, and John (20:9) that Scripture said he must rise from the dead.  Yet this is quite different from the specific Old Testament texts to which we find quotation and allusion in the material before Easter.

The second surprise is the absence of personal hope in the accounts.  Wrights sums this up well when he says: “If Mathew, Mark, Luke and John wanted to tell stories whose import was ‘Jesus is risen, therefore you will be too’, they have done a remarkably bad job of it” (pg. 603).  The accounts clearly witness to the resurrection of Jesus, but they do not apply the meaning of Jesus’ resurrection to those who believe in him (this is something that the other parts of the New Testament certainly do).

The third surprise is the description of Jesus.  When the resurrection is mentioned in Daniel we read: “And many of those who sleep in the dust of the earth shall awake, some to everlasting life, and some to shame and everlasting contempt. And those who are wise shall shine like the brightness of the sky above; and those who turn many to righteousness, like the stars forever and ever” (Daniel 12:2-3).  The reference to “shall shine” is reflected in the way that Jewish writings after the Old Testament describe the resurrection.  This is not how the Gospel accounts describe Jesus.  Wright comments: “To begin with, Jesus is never depicted, in these stories as a heavenly beings, radiant and shining … The sightings of, and meetings with, Jesus are not at all like the heavenly visions, or visions of a figure in blinding light or dazzling radiance, or wreathed in clouds, that one might expect in the Jewish apocalyptic tradition, or in connection with Merkabah mysticism” (pg. 604).

All four of these surprising features point to the fact that the resurrection accounts present what actually happened. They come from the very beginning of the Church. They describe the events that helped to create the Church.  They don’t describe things or develop them in the way we would expect them to do so.  Wright correctly argues that is the case “for the very good reason that stories as earth-shattering as this, stories as community-forming as this, once told, are not easily modified. Too much depends on them” (pg. 611).  They tell what happened in the beginning, and they couldn’t be changed because everyone had heard them.  The surprising features of the Easter accounts demonstrate the surprise of the resurrection that changed everything for the early disciples. His resurrection has changed everything for us as well.  Jesus is Lord. God raised him from the dead (Romans 10:9).