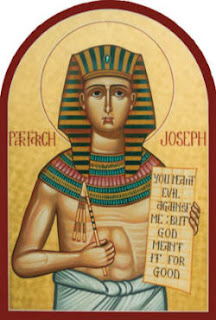 Almighty God, You have surrounded us with a great cloud of witnesses: Grant that we, encouraged by the good example of Your servant Joseph, may persevere in running the race that is set before us, until at last we may with him attain to Your eternal joy; through Jesus Christ, our Lord, who lives and reigns with You and the Holy Spirit, one God, now and forever.