Mark's thoughts: How should a Lutheran view the Apocrypha? 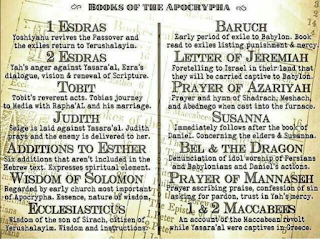 In recent years, the Apocrypha has received increased attention among Lutherans.  Concordia Publishing House even published The Apocrypha: The Lutheran Edition with Notes.  There is no doubt that the Apocrypha is a key resource for understanding the history, thought and piety of Second Temple Judaism.  It is also certainly true that the early and medieval Church used the Apocrypha as Scripture.  It is not surprising that this background left an impression on the Lutheran Church as the Apocrypha held an ambivalent status that surprises a modern Lutheran who knows only the Old Testament and the New Testament in the Bible.

However, an examination of the history of the Old Testament canon, of Luther’s translation of the Bible, and his own comments about the Apocrypha are a helpful caution against over emphasizing the importance that the Apocrypha has for Lutherans.  While they may provide interesting and pious reading, they are not inspired Scripture and in number of cases provide accounts that most likely did not occur.

The books of the Old Testament were written between ca. 1400 B.C. (Pentateuch) and ca. 400 B.C. (Chronicles).The evidence indicates that the Jews had a fixed collection of authoritative works in the first century A.D. (most likely this had come into being during the time of the Maccabees, second century B.C.).While the temple stood, the standard for the canon revolved around which books were laid up in temple (see Josephus, Antiquities, 3.1.7; 4.8.44; 5.1.17).  In his Antiquities he relates how they were laid up in the temple and describes this as if it had been that way for quite some time. Josephus in the first century A.D. Against Apion (1.37-43) tells of how there were 22 books.

Other evidence indicates a fixed and limited canon of Scripture.  Fourth Ezra (post 70 A.D.) says that there are 24 books (14:22-48) (24 is the most common way of describing things, though the books can be grouped in different ways).  The Babylonian Talmud (dated to 200 AD, but based on traditions that may extend back as far as 70 AD) lists 24 books that are identical to our Old Testament (B. b. Baba Bathra 14.14b-15a).  The fact that these diverse and varied sources (the Greco-Roman influenced Josephus, the apocalyptic work of Fourth Ezra, and the beginnings of rabbinic Judaism) all designate a limited canon is significant.

Writers from second century B.C. to the first century A.D. cite every book of our Old Testament as Scripture except for Ruth, Song of Songs and Esther.  At the same time, Jews were reading for edification other works such as those usually called Apocrypha (e.g. Tobit, Sirach, Maccabbees) and Pseudepigrapha (e.g., 1Enoch).  The Greek translation of the OT, the Septuagint (LXX), collected canonical books together with what we now know as non-canonical books (works that were edifying reading).  Modern scholarship has recognized the diversity that existed in Second Temple Judaism.  There is little doubt that there were readers who treated the writings as Scripture. However, this was not the prevailing view (see above) and it is not the view of the New Testament.

The NT never quotes the Apocrypha as Scripture.  As part of the Jewish cultural milieu these works were well known and often express entirely orthodox ideas.  It is not surprising that New Testament writers allude to them or use language that calls them to mind, such as Paul does with Wisdom of Solomon 13-15 in Romans 1:19-21, 23-25. Only Jude cites the Pseudepigrapha (Jude 9 tells of the account from the Assumption of Moses; Jude 14 refers to 1En 1:9).  However, there is debate as to how exactly Jude is using these texts.  2 Peter, which seems to be related to Jude, doesn’t use these citations.

We must not underestimate the influence of the break between Christianity and Judaism around the end of the first century A.D.  The Church became Gentile and no longer had a connection with the setting in which the canon arose.  The distinction between canonical Scripture and edifying works was no longer understood.  It wasn’t until the fourth century A.D. that the technology of the codex allowed for all of the OT be put in one codex.  Before this time it wasn’t obvious which ones were “in the book.”

The earliest Christians such as Paul used the Greek translation of the OT, Septuagint (LXX), when citing Scripture.  The LXX became the Christians’ book since during the second century A.D. Jews produced new translations of LXX in order to remove readings that lent themselves to Christian interpretations of the Old Testament (Aquila, Symmachus).  From the second century A.D. on, Christians began to use all of LXX.  Most readers were no longer fully aware of the distinction between the books within this collection.  However, there were doubts and disagreements.  Around 180 A.D. Melito of Sardis relates the canon he learned from the Jews (it differs from ours in that it adds Wisdom of Solomon and omits Esther) (Eusebius, Ecclesiastical History, 4.26.13-14).  Melito assumes that Christian canon is same as one he received from the Jews.

Prior to Jerome (late fourth century A.D.) Latin translations of the LXX had been done (in which the canonical and Apocryphal books were mixed together).  Jerome produced a new translation of the OT from Hebrew originals and a new translation of the Apocrypha from the Greek.  Jerome was familiar with Jewish canon and stated that outside of the 22/24 books (depending on how you combine them), all the rest are Apocrypha.  They could be read for edification but should not used for establishing dogma (see the discussion in F.F. Bruce, The Canon of Scripture, 87-93).  The same view can be found in Athanasius 22 books (ca. 296-373 A.D.); Synopsis Scitpurae Sacrae 22 books (ca. 350-379 A.D.); Cyril of Jerusalem 22 books (ca 350 A.D.); Epiphanius – 22 books (exact same list as our canon) (ca. 320-400 A.D.); Gregory of Nazianzus 22 books (ca. 370 A.D.).

The Vulgate, like earlier Latin editions, included all of the books together.  Most in the Church used the entire Vulgate on an equal basis.  However, the Church also remembered the distinction indicated by Jerome.  Hugh of St. Victor, head of school at Abbey of St Victor at Paris in the twelfth century said that Apocrypha could be read but didn’t have authority (On the Sacraments, I, Prologue 7).

Although the psuedepigrapha was used by the early church (probably influenced by the books’ own claims to be prophetic), usage declined rapidly after the time of Origen (late second century A.D.) and they were no longer in the picture by the fourth century A.D.

Martin Luther’s treatment of the Apocrypha in the German Bible that he helped produce provides useful guidance in how Lutherans should approach the these works. First, Luther did not follow the practice of the Vulgate (or of the Septuagint) in which books of the Apocrypha were mixed in among canonical books.  Instead, he set the Apocrypha off as a separate section. Second, “Luther’s translation of the Apocrypha was selective in that he omitted some of the books or portions that had been included in the Septuagint and Vulgate” (Bachmann, nt. 1, Luther’s Works 35, pg. 337).  Third, in addition to setting the Apocrypha off as separate material, the 1534 printing of the Bible included the title: “Apocrypha: These books are not held equal to Holy Scripture: and are still useful and good to read” (“Apocrypha: Das sind Bücher so nich der heiligen Schrift gleichgehalten: und doch nützlich und gut zu lessen sind”) (text cited from Reu, Luther’s German Bible, 225.)  Reu correctly observes that by this title page the Apocrypha are “marked as something secondary in contrast to the canonical books” (Luther’s German Bible, 226).

Finally, Luther’s assessment of a number of books in the Apocrypha as expressed in his 1534 prefaces correctly frames the manner in which we should view them.  He says of Judith: “If one could prove from established and reliable histories that the events in Judith really happened, it would be a noble and fine book, and should properly be in the Bible.  Yet it hardly squares with the historical accounts of the Holy Scriptures, especially Jeremiah and Ezra” (LW 35, 337).

Instead. Luther describes it as a kind of pious fictional literature: “Therefore this is a fine, good, holy, useful book, well worth reading by us Christians.  For the words spoken by the persons in it should be understood as though they were uttered in the Holy Spirit by a spiritual, holy poet or prophet who, in presenting such persons in his play, preaches to us through them” (LW 35, 339).

He says of Tobit: “What was said about the book of Judith may also be said about the book of Tobit.  If the events really happened, then it is a fine and holy history. But if they are all made up, then it is indeed a very beautiful, wholesome, and useful fiction or drama by a gifted poet” (LW 35, 345). Thus Luther’s assessment is: “Therefore this book is useful and good for Christians to read.  It is a work of a fine Hebrew author who deals not with trivial but important issues, and whose writing and concerns are extraordinarily Christian” (LW 35, 347).

Luther says of Susanna, and Bel and the Dragon: “But the texts of Susanna, and of Bel, Habakkuk, and the Dragon, seem like beautiful religious fiction, such as Judith and Tobit, for their names indicate as much” (LW 35, 354; Bachman notes that: “The subordinate role of the prophet Habakkuk in Bel and the Dragon verses 33-39), as well as the reference to him in the opening verse of the Septuagint text … may have led to Luther’s inclusion of the name in the title; nt. 65).

Of course, what would become the Roman Catholic church took a very different approach towards the Apocrypha.  In addition to past use in the Church, the status of the Apocrypha was wrapped up in other doctrinal issues (for example, Roman Catholics used 2 Mac 12:46 which talks about making atonement for dead as a verse in support of purgatory).  In 1546 the Council of Trent made the Vulgate text the authoritative text and accepted all the books without distinction. This continues to be the Roman Catholic position.

So what is a Lutheran to make of the Apocrypha?  In my New Testament graduate studies I have worked extensively with them as sources for understanding Second Temple Judaism. Certainly, they are very important in this role.  But for the lay person, what importance do they really have?  They are not part of the canonical Old Testament, and are not the inspired Word of God.  There are books that contain pious, orthodox statements (e.g. Wisdom of Solomon and Sirach) that are similar to what are found in the Psalms and Wisdom literature of the Old Testament.  A number of the writings (e.g. Judith, Tobit, Susanna, Bel and the Dragon) are best understood as pious fictions that can be read as conveying some spiritual worth.

However, the net result of reading the Apocrypha is very minimal.  If one has completely mastered the Old Testament and New Testaments, then certainly the Apocrypha is something to read.  Personally, I have not in any way arrived at the point, so I will continue to focus on the canonical Old and New Testaments.  I suspect that most people will find themselves in the same position.