Mark's thoughts: Why did He do it? 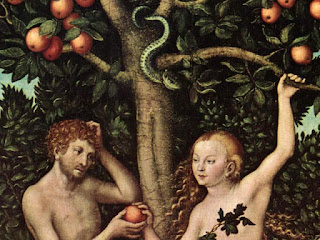 Why did he do it? Why did God create us with the ability to sin and fall?  Why did he do this, knowing that this is exactly what Adam and Eve would do?  It is a question that seventh and eighth graders immediately raise when they learn about the Fall and what it is has done to us.  The all-knowing God knows what Adam and Eve will do.  Yet he creates them with the ability to do it.

God created man in his own image (Genesis 1:27). In this way we are different from the rest of creation and stand over it as God’s representative (Genesis 1:28; 2:15). We were created to be like God in ways that nothing else was.  We were created to know God as he wants to be known. We were created to live perfectly according to his will – his ordering of creation.  God told Adam, “You may surely eat of every tree of the garden, but of the tree of the knowledge of good and evil you shall not eat, for in the day that you eat of it you shall surely die” (Genesis 2:16). By obeying this one command, Adam worshipped God in the faith that is God is God, and he was not. But God had also given the Adam the freedom to disobey and reject God.

Why did he do it?  Part of the answer must be found in what it means to be created in the image of God.  God could have created us as robot-like creatures who could never do anything other what we were programmed to do. But apparently, that is not what God wanted in the relationship with man.  Instead, he wanted man to live in faith and love towards him, and that status included the ability to reject God.

Yet the more important answer is that while God knew what Adam and Eve would do, he also knew what he would do in response to their sin.  He knew that he would act in the incarnation of the Son of God.  John begins his Gospel by writing: “In the beginning was the Word, and the Word was with God, and the Word was God” (John 1:1). We learn that the Word – the Son of God – was with God in the beginning and all things were made through him (John 1:2-3).  Yet then John says, “And the Word became flesh and dwelt among us, and we have seen his glory, glory as of the only Son from the Father, full of grace and truth.” (John 1:14).

The Son of God became flesh.  In the incarnation he became man, without ceasing to be God. God showed that he loved man so much that he was willing to enter creation itself and become man in order to save him. That is what was revealed on Christmas Eve as the baby Jesus was in the manger. St. Paul wrote, “But when the fullness of time had come, God sent forth his Son, born of woman, born under the law, to redeem those who were under the law, so that we might receive adoption as sons” (Galatians 4:4-5).  Not only did the Son of God become man, but he did this to order die on the cross as the sacrifice that removed our sin. He came as the second Adam to undo what the first Adam had done.  Paul told the Romans, “For as by the one man's disobedience the many were made sinners, so by the one man's obedience the many will be made righteous” (5:19).

Adam’s sin brought death.  In the incarnation, Jesus Christ was the second Adam who suffered death in order to defeat it.  Jesus, true God and true man, died and was buried. But on Easter God raised Jesus from the dead with a body transformed so that it can never die again. Paul told the Corinthians:

But in fact Christ has been raised from the dead, the firstfruits of those who have fallen asleep. For as by a man came death, by a man has come also the resurrection of the dead. For as in Adam all die, so also in Christ shall all be made alive. But each in his own order: Christ the firstfruits, then at his coming those who belong to Christ. (15:20-23)

Jesus clearly demonstrated that his was a bodily resurrection. He said to the disciples, “See my hands and my feet, that it is I myself. Touch me, and see. For a spirit does not have flesh and bones as you see that I have” (Luke 24:39).  Jesus rose as the One who is true God and true man, and he ascended as the One who is still true God and true man.  Seated at the right hand of God, Jesus has taken renewed humanity into the presence of God.

On the Last Day, Jesus will return in glory as he raises our bodies. He “will transform our lowly body to be like his glorious body, by the power that enables him even to subject all things to himself” (Philippians 3:21). In doing so, he will have renewed our lives to be like what Adam’s was meant to be.

Yet, things can never be exactly like they were in the beginning, because the incarnate Son of God will always be the incarnate Son of God. The One who gives us his true body and blood in the Sacrament of the Altar will always have a human nature.  In the incarnation of the Son, God has revealed in a new and deeper way how much he values us as his creatures. In a profoundly new way God has demonstrated the depths of his love for us by giving his Son to suffer and die for us in the flesh. Did God know what Adam and Eve would do? Yes. But he also knew what he would do in the incarnation to save us. And through this action he has revealed these truths in new and amazing ways.