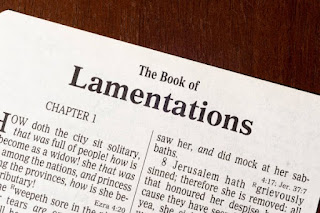 With a name like “Lamentations,” you don’t expect to find much that is positive in this book of the Old Testament.  Lamentations was written after the destruction of Jerusalem in 587 B.C.  The Babylonians destroyed the temple, tore down the city’s walls, and took all but the poorest of the land into exile in Babylon.

As the name of the book describes, the author (who was perhaps Jeremiah) laments the conditions of Jerusalem.  He begins by saying: “How lonely sits the city that was full of people! How like a widow has she become, she who was great among the nations! She who was a princess among the provinces has become a slave” (1:1).  Lamentations describes the destruction as it states: “In the dust of the streets lie the young and the old; my young women and my young men have fallen by the sword; you have killed them in the day of your anger, slaughtering without pity” (2:21)

There is no doubt about who had done this.  Yahweh had brought judgment and wrath against his people.  Lamentations 2:1-3 says:

How the Lord in his anger has set the daughter of Zion under a cloud! He has cast down from heaven to earth the splendor of Israel; he has not remembered his footstool in the day of his anger. The Lord has swallowed up without mercy all the habitations of Jacob; in his wrath he has broken down the strongholds of the daughter of Judah; he has brought down to the ground in dishonor the kingdom and its rulers. He has cut down in fierce anger all the might of Israel; he has withdrawn from them his right hand in the face of the enemy; he has burned like a flaming fire in Jacob, consuming all around.

While Yahweh has brought judgment, there is also do doubt why He had done it.  The writer confesses the sins of the people: “Jerusalem sinned grievously; therefore she became filthy; all who honored her despise her, for they have seen her nakedness; she herself groans and turns her face away.” He adds, “The LORD is in the right, for I have rebelled against his word” (1:18).

The writer also laments how the enemies of Judah celebrate the destruction of Jerusalem:

All who pass along the way clap their hands at you; they hiss and wag their heads at the daughter of Jerusalem: “Is this the city that was called the perfection of beauty, the joy of all the earth?” All your enemies rail against you; they hiss, they gnash their teeth, they cry: “We have swallowed her! Ah, this is the day we longed for; now we have it; we see it!” (2:15-26).

Yet in the midst of this doom and gloom shines a passage that give tremendous hope and encouragement.  We read in 3:21-26:

But this I call to mind, and therefore I have hope: The steadfast love of the LORD never ceases; his mercies never come to an end; they are new every morning; great is your faithfulness. “The LORD is my portion,” says my soul, “therefore I will hope in him.” The LORD is good to those who wait for him, to the soul who seeks him. It is good that one should wait quietly for the salvation of the LORD.

The writer laments the tragedy of judgment and confesses the sin of the people.  Yet that is not all.  He returns in faith to the reason for hope: the steadfast love of the Lord never ceases; his mercies never come to an end; and the Lord’s faithfulness is great. Therefore, it is good to wait for the salvation of the Lord.

Lamentations confesses the loving and merciful character of God.  In this, the writer finds hope.  We have this hope too, because God has demonstrated this character through his incarnate Son, Jesus Christ.  Jerusalem was important not because it was the place where the king lived.  Instead, it was important because of the temple which was the place of God’s located presence in the midst of his people. God demonstrated this fact at the dedication of the temple. We learn in 1 Kings 8, “And when the priests came out of the Holy Place, a cloud filled the house of the LORD, so that the priests could not stand to minister because of the cloud, for the glory of the LORD filled the house of the LORD” (8:10-11).

In response to Judah’s sin, God abandoned and destroyed the temple in his judgment along with the city in which it stood. As we have seen Lamentations describes the response of Judah’s enemies: “All who pass along the way clap their hands at you; they hiss and wag their heads at the daughter of Jerusalem” (2:15).

Jesus Christ was the fulfillment of the temple as God’s glory dwelt in the midst of his people through the incarnate Son of God (John 1:14).  Jesus told his opponents, “Destroy this temple, and in three days I will raise it up” (John 2:19), as he spoke of the temple of his body (John 2:21).  On Good Friday, Jesus hung on the cross.  Matthew tells us, “And those who passed by derided him, wagging their heads and saying, ‘You who would destroy the temple and rebuild it in three days, save yourself! If you are the Son of God, come down from the cross’” (Matthew 27:39-40).

The destruction of the temple in God’s judgment pointed forward to the judgment God poured out on Jesus Christ in our place.  Our Lord Jesus drank the cup of God’s wrath against our sin (Matthew 28:39).  On the cross Jesus cried out, “My God, my God, why have you forsaken me?” (Matthew 27:46).  As God abandoned his temple in the Old Testament in judgment, so God abandoned his own Son as he received the judgment against our sin to win forgiveness for us.

But God had promised in the Old Testament that his Holy One would not see corruption (Psalm 16:10; Acts 2:25:28).  On the third day God raised Jesus from the dead. Peter tells us, “Blessed be the God and Father of our Lord Jesus Christ! According to his great mercy, he has caused us to be born again to a living hope through the resurrection of Jesus Christ from the dead” (1 Peter 1:3).  In the death and resurrection of Jesus we have the forgiveness of sins, and the assurance of resurrection and eternal life.

God has revealed his loving and merciful character to us through his incarnate Son. Because we know this, we can trust in God and find comfort in the midst of all circumstances. We know that like the writer of Lamentations, we too can say:

But this I call to mind, and therefore I have hope: The steadfast love of the LORD never ceases; his mercies never come to an end; they are new every morning; great is your faithfulness. “The LORD is my portion,” says my soul, “therefore I will hope in him.” The LORD is good to those who wait for him, to the soul who seeks him. It is good that one should wait quietly for the salvation of the LORD. (Lamentations 3:21-26).