Mark's thoughts: The evidence left by what really happened 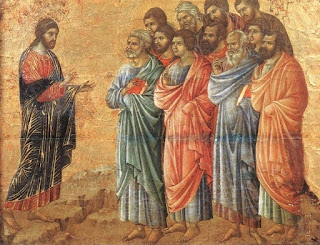 And if Christ has not been raised, then our preaching is in vain and your faith is in vain. (1 Corinthians 15:14)

The apostle Paul left no doubt when he wrote to the Corinthians that the Christian faith stands or falls with the resurrection of Jesus Christ. He told them that if Christ has not been raised, then Paul and the apostles were lying about what God had done (15:15).  If Christ has not been raised, then they were still in their sins (15:17) and those who had died had perished (15:18).  With brutal honesty he stated: “If in Christ we have hope in this life only, we are of all people most to be pitied” (15:19).

Of course, Paul’s ultimate point was: “But in fact Christ has been raised from the dead, the firstfruits of those who have fallen asleep” (15:20).  The first Christians asserted that Jesus Christ who had died by crucifixion on Good Friday rose from the dead and appeared to them. Peter declared on the Day of Pentecost, “This Jesus God raised up, and of that we all are witnesses” (Acts 2:32).

As part of the Gospel, belief in the resurrection of Jesus is something that that can only be worked by the Holy Spirit as He calls people to faith.  We are able to confess that Jesus is Lord because of the Spirit (1 Corinthians 12:3).  In the Creed we confess, “I believe….”  The Gospel, and therefore the resurrection, will always be a matter of faith.  Paul told the Romans, “Because, if you confess with your mouth that Jesus is Lord and believe in your heart that God raised him from the dead, you will be saved. For with the heart one believes and is justified, and with the mouth one confesses and is saved” (Romans 10:9-10).

Yet faith in the resurrection is not pure wishful thinking. Because Christ really did rise from the dead, the resurrection has left evidence that strongly supports the first Christians’ claims.  First, it must be recognized that with the exception of the Gospel of Mark (which in its original form, 16:1-8, only narrates the empty tomb), every single Christian witness presents the resurrection as an absolutely unmistakable event. Paul tells of how Jesus appeared to the apostles (1 Corinthians 15:5) and the same fact is reported by the Gospels (Matthew 26:16-20; Luke 24:36-48; John 20:19-28) and Acts (2:32; 10:39-41).  During these encounters Jesus invited them to touch him (Luke 24:39; John 20:26-27). He ate in front of them (Luke 24:41-43), with them (Acts 10:39-41), and gave them food to eat (John 21:9-13). These are not events about which a group of people could be mistaken. More than this, Paul reports that more than five hundred believers at one time saw Jesus (15:6). The experience of the women was also one in which they physically took hold of Jesus’ feet (Matthew 28:9).  The witness of the first believers in the New Testament is that there could have been no mistake about Jesus’ resurrection.  Either Jesus rose from the dead just as they said, or they are lying.

Second, we find that the resurrection of Jesus convinced those who had believed in Jesus, those who did not believe in him before his death, and an individual who was an enemy of Christ. Certainly, the apostles and those with them who had followed Jesus during his ministry (Acts 1:15 tells us that there were one hundred and twenty of them in Jerusalem forty days after Easter, though the five hundred of 1 Corinthians 15:6 indicates that there were more who had probably returned to Galilee) were convinced by his resurrection.

Yet we also learn that from the start James (1 Corinthians 15:7) along with the other brothers of Jesus (Acts 1:14) were believers and that they engaged in mission work (1 Corinthians 9:5) to spread the Gospel. This is important because John 7:5 tells us, “For not even his brothers believed in him.” Mark shares the same picture when he writes, “And when his family heard it, they went out to seize him, for they were saying, ‘He is out of his mind’” (Mark 3:21).  In particular, James became the leader of the Jerusalem church (Acts 15:12-21), and there is no reason that these writers would have included information that cast him in a negative light unless it was entirely true.  Before Easter, James and brothers of Jesus did not believe in the Lord.  After the resurrection they did because the risen Lord had appeared to them.  They became missionaries sharing the Good News about Jesus, and in the case of James we know that he was martyred for the sake of faith in Jesus.

Paul was an enemy of Jesus and was determined to destroy the Church that believed in him. He described this to the Galatians when he wrote, “For you have heard of my former life in Judaism, how I persecuted the church of God violently and tried to destroy it” (Galatians 1:13).  He told Timothy, “I thank him who has given me strength, Christ Jesus our Lord, because he judged me faithful, appointing me to his service, though formerly I was a blasphemer, persecutor, and insolent opponent” (1 Timothy 1:12-13).  However, the risen Lord appeared to Paul (Acts 9:1-9), and he described this to the Galatians by saying that God who had set him apart before he was born and who called Paul by grace “was pleased to reveal his Son to me” (Gal 1:16).  Though Paul was a rising star in Judaism (Galatians 1:14; Philippians 3:4-6), he threw all of that away to proclaim the risen Lord.

Finally, we find that the apostles and other believers in Christ went forth to proclaim a message that sounded completely absurd to the world around them.  They declared that a Jew who had been crucified (the death of a criminal) was the Messiah and Lord of both Jews and Gentiles.  Paul told the Philippians about Jesus, “And being found in human form, he humbled himself by becoming obedient to the point of death, even death on a cross” (Philippians 2:8).  He freely admitted to the Corinthians, “For the word of the cross is folly to those who are perishing, but to us who are being saved it is the power of God” (1 Corinthians 1:18). Then later he added, “For Jews demand signs and Greeks seek wisdom, but we preach Christ crucified, a stumbling block to Jews and folly to Gentiles, but to those who are called, both Jews and Greeks, Christ the power of God and the wisdom of God. For the foolishness of God is wiser than men, and the weakness of God is stronger than men” (1 Corinthians 1:22-25).

The first Christians were willing to go forth to work, suffer and die in order to proclaim this message.  If we ask why they did, their answer is very simple: “This Jesus God raised up, and of that we all are witnesses” (Acts 2:32).  In unmistakable ways they had met and been with Jesus risen from the dead during the forty days from Easter to the ascension of Jesus (Acts 1:3).  They knew that God had vindicated Jesus by his resurrection, and that the risen Lord had defeated death.  They had nothing to fear because they knew that to die was to be with Christ (Philippians 1:23), and that the risen and exalted Lord would return on the Last Day to raise them up and transform their bodies to be like his (Philippians 3:21).  Because we believe in the risen Lord through their witness, we have the same hope and confidence too.