Mark's thoughts: A reminder of the incarnation and the cross 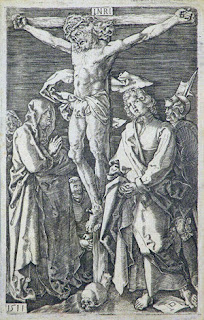 For in him the whole fullness of deity dwells bodily. (Colossians 2:9)

And you, who once were alienated and hostile in mind, doing evil deeds, he has now reconciled in his body of flesh by his death, in order to present you holy and blameless and above reproach before him.  (Colossians 1:21-22)

In this pair of texts, the apostle Paul teaches about the incarnation of the Son of God, and about purpose of the incarnation.  In the first, Colossians 2:9, he says that the Son who is truly God in every way, dwells bodily in the person of Jesus Christ. A real man who lived in this world, he is also true God. This is the same truth that the apostle John teaches when after telling us that the Son, the Word, is God (John 1:1) goes on to say, “And the Word became flesh and dwelt among us, and we have seen his glory, glory as of the only Son from the Father, full of grace and truth” (John 1:14).

In the second text, Paul says that through the death of his fleshly body (literally, “body of flesh”), Christ reconciled us to God.  By this death he has made us holy and blameless before God the Father.  In the incarnation, the Son of God took on a human nature. He was conceived by the Holy Spirit and born of the virgin Mary with a fleshly body, just like ours.  Though without sin, he was born with a body that could die – that could be killed.  In fact, he came in order to die.  Jesus said during Holy Week, “Now is my soul troubled. And what shall I say? 'Father, save me from this hour'? But for this purpose I have come to this hour” (John 12:27).  The purpose of the incarnation was for the Son of God to receive the judgment of God against our sin, so that we will never experience this. Paul wrote elsewhere, “For our sake he made him to be sin who knew no sin, so that in him we might become the righteousness of God” (2 Corinthians 5:21).

This year, the Church calendar brings together the celebration of these events in a remarkable way.  On March 25 we celebrate the Feast of the Annunciation of Our Lord.  Nine months before Christmas, we celebrate the message that the angel Gabriel delivered to Mary as he told her that she would conceive and give birth to the Messiah.  When she asked, “How will this be, since I am a virgin?”, Gabriel answered:  "The Holy Spirit will come upon you, and the power of the Most High will overshadow you; therefore the child to be born will be called holy--the Son of God” (Luke 1:34-35).  Then Palm Sunday follows three days later on March 28 as Holy Week begins. During that week we focus on the Passion of our Lord that culminates on Good Friday as he dies on the cross.  The Church calendar brings together the incarnation and the cross, and holds them together before us.  Our Lord was conceived and born with a fleshly body, in order to be nailed to a cross for us.

However, note how Paul expresses himself in Colossians 2:9 as he writes: “For in him the whole fullness of deity dwells bodily.”  The apostle speaks of the incarnation not as a past reality, but as a present and ongoing one.  The Son of God was not only conceived and born with a fleshly body in order to die.  He also did so in order to transform the fleshly body in the resurrection so that it can never die again. Paul says in Colossians 1:18, “He is the beginning, the firstborn from the dead, that in everything he might be preeminent.”  On Easter, God raised Jesus from the dead. The Lord who rose and ascended into heaven and will return is still true God and true man.  The risen Jesus told the disciples on the evening of Easter, “See my hands and my feet, that it is I myself. Touch me, and see. For a spirit does not have flesh and bones as you see that I have” (Luke 24:39).  Jesus has begun the resurrection of the Last Day, and we will share in this when Christ returns in glory. That is why Paul told the Philippians that we “await a Savior, the Lord Jesus Christ, who will transform our lowly body to be like his glorious body, by the power that enables him even to subject all things to himself” (3:20-21).