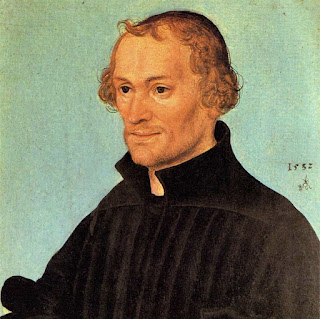 Today we remember and give thanks to God for Philip Melanchthon, Confessor.   Philip Melanchthon (1497-1560) was a brilliant student of the classics and a humanist scholar. In 1518 he was appointed to teach along with Martin Luther at the University of Wittenberg. At Luther's urging, Melanchthon began teaching theology and Scripture in addition to his courses in classical studies. In April of 1530, Emperor Charles V called an official meeting between the representative of Lutheranism and Roman Catholicism, hoping to effect a meeting of minds between two opposing groups. Since Luther was at that time under papal excommunication and an imperial ban, Melanchthon was assigned the duty of being the chief Lutheran representative at this meeting. He is especially remembered and honored as the author of the Augsburg Confession, which was officially presented by the German princes to the emperor on June 25, 1530.  It is the defining confessional document of Lutheranism.

Almighty God, we praise You for the service of Philipp Melanchthon to the one, holy, catholic and apostolic Church in the renewal of its life in fidelity to Your Word and promise.  Raise up in these gray and latter days faithful teachers and pastors, inspired by Your Spirit, whose voice will give strength to Your Church and proclaim the ongoing reality of Your kingdom; through Your Son, Jesus Christ, our Lord, who lives and reigns with You and the Holy Spirit, one God, now and forever.