Commemoration of John of Damascus - Theologian and Hymnwriter 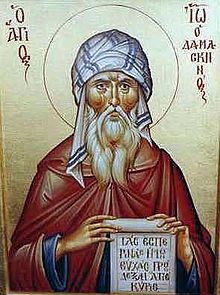 Today we remember and give thanks for John of Damascus, Theologian and Hymn writer.  John (ca. 675–749) is known as the great compiler and summarizer of the orthodox faith and the last great Greek theologian. Born in Damascus, John gave up an influential position in the Islamic court to devote himself to the Christian faith. Around 716 he entered a monastery outside of Jerusalem and was ordained a priest. When the Byzantine emperor Leo the Isaurian in 726 issued a decree forbidding images (icons), John forcefully resisted. In his Apostolic Discourses he argued for the legitimacy of the veneration of images, which earned him the condemnation of the Iconoclast Council in 754. John also wrote defenses of the orthodox faith against contemporary heresies. In addition, he was a gifted hymn writer (“Come, You Faithful, Raise the Strain”) and contributed to the liturgy of the Byzantine churches. His greatest work was the Fount of Wisdom which was a massive compendium of truth from previous Christian theologians, covering practically every conceivable doctrinal topic. John’s summary of the orthodox faith left a lasting stamp on both the Eastern and Western churches.

O Lord, through Your servant John of Damascus, You proclaimed with power the mysteries of the truth faith.  Confirm our faith so that we may confess Jesus to be true God and true man, singing the praises of the risen Lord, and so that by the power of the resurrection we may also attain to the joys of eternal life; through Jesus Christ, our Lord, who lives and reigns with You and the Holy Spirit, one God, now and forever.