Mark's thoughts: The Christ who does not change in the midst of change and uncertainty 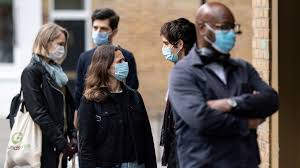 During my entire adult life I have heard that a pandemic was coming.  I heard again and again that it wasn’t a matter of if it would happen.  It was instead only a matter of when it would happen.  Ironically, during the end of 2019 I watched an interesting series on Netflix about this topic, and the scientists who were trying to monitor situations that could lead to such a pandemic.  China was identified as a very likely source where are a virus could make the jump from birds to humans.

Whenever I heard about a “pandemic,” the historical example that was always cited was the Spanish flu of 1918 that killed millions of people worldwide – in fact more people died from this pandemic than died in World War I. Over the years, pandemics were portrayed in movies like “Outbreak” and “Contagion” as events that brought massive levels of death.

I can remember in January when I first heard about a virus in China. At the time, I could not have imagined that it would lead to the situation we find ourselves in today.  It never occurred to me that this virus would encompass the entire world and become a pandemic.

Yet at the same time, after hearing for years that a pandemic was coming, I never imagined that it would look like this.  While people have certainly died, it is not something that has crippled society with massive levels of death.  We aren’t seeing the need for mass graves like occurred in the United States at the time of the Spanish flu or as has been depicted in movies.

Instead the response prompted by COVID has transformed much of the way we live. We cannot conduct the Divine Service in church the way we normally have.  We cannot eat in restaurants or go the movie theater in the way we once did.  We are wearing masks to go to the grocery store. The way school is being done at the start of the school year is completely different from anything we have ever seen. And the unsettling thing is that we don’t know how long this will last.

In the midst of change and uncertainty, we must look to the only One who is unchanging and certain.  Hebrews 13:8 says, “Jesus Christ is the same yesterday and today and forever.”  When the apostle John was in exile on the island of Patmos, the risen appeared to him in a vision as the exalted Lord and said, “"Fear not, I am the first and the last, and the living one. I died, and behold I am alive forevermore, and I have the keys of Death and Hades” (Revelation 1:17-18).

Our Lord who died on the cross and rose from the dead is our source of unchanging comfort in the midst of change and uncertainty.  His love and presence with us is eternal.  He has given us the assurance and guarantee of this because we have been baptized into Christ.  In fact Paul can describe us as already sharing in his resurrection because we have, “been buried with him in baptism, in which you were also raised with him through faith in the powerful working of God, who raised him from the dead” (Colossians 2:12).

While there are situations in which people should be prudent, for this same reason, COVID cannot be a source of fear.  We know the One who has defeated death.  Even in its worst outcome, the virus is powerless to harm us.  At the tomb of Lazarus, Jesus said to Martha, “I am the resurrection and the life. Whoever believes in me, though he die, yet shall he live, and everyone who lives and believes in me shall never die” (John 11:25-26).  Jesus has promised that because of him, eternal life is already ours. We will never die because our life with Christ will never end.  And even if our body dies (as it will for all of us unless the Lord returns first), we will live again because Jesus will raise and transform our bodies on the Last Day.  As Paul wrote we await from heaven “a Savior, the Lord Jesus Christ, who will transform our lowly body to be like his glorious body, by the power that enables him even to subject all things to himself” (Philippians 3:21).

The pandemic has brought change and uncertainty.  But the Lord Jesus has not changed.  He is the risen and exalted Lord who has won forgiveness for us and has defeated death.  In Christ we have received God’s eternal and unchanging love. Paul knew all about change and uncertainty as he served as an apostle of Jesus Christ. Yet because of the risen Lord he declared:  “For I am sure that neither death nor life, nor angels nor rulers, nor things present nor things to come, nor powers, nor height nor depth, nor anything else in all creation, will be able to separate us from the love of God in Christ Jesus our Lord” (Romans 8:38-39).