Mark's thoughts: To my Roman Catholic friends in this time of crisis 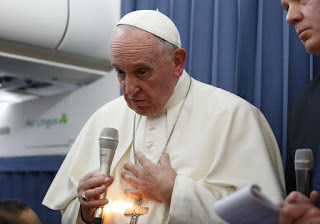 In recent days it has been nearly impossible to ignore the stream of shocking revelations and allegations regarding the Roman Catholic church.  New evidence of widespread sexual abuse by priests has come to light.  There has been the revelation that now ex-Cardinal Theodore McCarrick was well known among church leaders for his homosexual activities.  And then there has been the allegation by Archbishop Carlo Maria Viganò that Pope Francis himself has been involved in ignoring McCarrick’s behavior, while instead giving him new responsibilities.  It has become clear that homosexual behavior and acceptance has a strong presence among the Roman Catholic clergy – especially among those in positions of leadership.

As I have watched these developments, my thoughts have often turned to the effect this is having on my Roman Catholic friends.  During the time that my children attended a Roman Catholic parochial school I had the opportunity to get to know many faithful and pious Roman Catholic congregation members. These have been traumatic revelations that have caused great pain, frustration and anger.  They shake confidence in the church, and there is the potential for Satan to use them undermine faith in Christ himself.  And so I pray for you as fellow baptized Christians who confess the same ecumenical Creeds and with whom I share in so much catholic faith and practice.
I also pray that the truth of these matters will be revealed, and that in this process the Roman Catholic church will be enabled to hold onto and actually practice the biblical teaching about sexuality she confesses.  This is important for the well being of the Christians who are part of your fellowship.  It is equally important for me and all Christians who hold a biblical view about sexuality.  If the forces in the Roman Catholic church that promote homosexuality (and I can only view Pope Francis, at the very least, as being sympathetic to this cause ) succeed in increasing the Roman Catholic church’s official acceptance of homosexuality, it will have a devastating impact on Christianity as a whole.  The sheer ecclesial weight of the Roman Catholic church aligned with the immense cultural power of homosexuality would make homosexuality nearly impossible to resist.  Only God knows how it would be possible.

Because the media seeks to advance the cause of homosexuality, it has refused to acknowledge what analysis has made clear. While certainly there are priests who have sexually abused girls, the majority of abuse has involved homosexual activity by priests directed at boys who have passed through puberty.  This abuse, in turn, is part of the larger homosexual culture that has established itself in the Roman Catholic clergy.

I have seen Roman Catholic writers honestly and courageously confront this fact.  But in these responses there is, to me, a puzzling inability and unwillingness to address another issue.  To be sure, all kinds of sexual abuse exist in the churches of all fellowships.  But it seems undeniable that the preponderance of sexual abuse in the Roman Catholic church is directed at boys, male youths, and seminarians. This, in turn, is one symptom of the fact that homosexual activity has a strong presence among Roman Catholic clergy and seminaries.

On the other hand, sexual abuse by non-Roman Catholic pastors is weighted more heavily toward female victims.  Pastors removed from office because of sexual sin with adults, usually engage in sin involving women.  In those fellowships that have not followed in the way of liberal Christianity by accepting homosexuality, homosexual activity among clergy is basically unheard of.  Pastors may commit adultery. They don’t typically have sex with other men.

If one is willing to engage this possibility, it leads to a consideration of the ways that this requirement contradicts what Holy Scripture actually says. There is no passage in Holy Scripture that says a priest/pastor must be unmarried and celibate.  In fact, quite the opposite, Paul writes:


The saying is trustworthy: If anyone aspires to the office of overseer, he desires a noble task. Therefore an overseer must be above reproach, the husband of one wife, sober-minded, self-controlled, respectable, hospitable, able to teach, not a drunkard, not violent but gentle, not quarrelsome, not a lover of money. He must manage his own household well, with all dignity keeping his children submissive, for if someone does not know how to manage his own household, how will he care for God's church? (1 Timothy 3:1-5; see also Titus 1:5-6).

Because of this clear biblical teaching, there is a long history of married priests.  The Council of Nicaea in 325 A.D. refused to require celibacy and it was only at the end of the eleventh century when Pope Gregory VII enforced celibacy in a general way.  At the time when he did this, priests in Germany were still allowed to marry.

The requirement of celibacy contradicts what God has revealed in his Word about the ordering of his creation. God created man as male and female and gave them the mandate to be fruitful and multiply (Genesis 1:27-28).  He said, “It is not good that the man should be alone; I will make him a helper fit for him” (Genes 2:18), and created Eve from Adam to be joined in the one flesh union of marriage (2:21-25; see also Matthew 19:4-6).  Scripture clearly teaches that the married state was instituted by God to avoid sexual immorality.  The apostle Paul stated, “But because of the temptation to sexual immorality, each man should have his own wife and each woman her own husband (1 Corinthians 7:2), and then went on to say, “But if they cannot exercise self-control, they should marry. For it is better to marry than to burn with passion” (1 Corinthians 7:9).

To be sure, Paul recognized that the man who was single and celibate can devote all his attention to service in the Church.  He wrote:

Yet the Lord Jesus explicitly stated (Matthew 19:9-12) that this is not something everyone can do. When the disciples heard Jesus’ teaching about marriage and divorce they said, “If such is the case of a man with his wife, it is better not to marry” (Matthew 19:10).  Our Lord responded, “Not everyone can receive this saying, but only those to whom it is given” (Matthew 19:11). He knew human nature and the fact that few people have the gift to live a celibate life.

When a church demands requirements that contradict God’s Word and what he has revealed about his ordering of creation, the result will always be harmful for God’s people.  In 1530 the first Lutherans stated in the Augsburg Confession regarding the prohibition of clergy marriage: “From everyone, both of high and low degree, a mighty, loud complaint has been heard throughout the world about the flagrant immorality and dissolute life of priests who were not able to remain chaste; their vices reached the height of abomination” (XXIII.1).  Those words continue to ring true as we survey the Roman Catholic crisis today.

In the prohibition of marriage and the demand for celibacy among clergy we see one small example of what happens when a church establishes teachings that have no basis in Scripture, or that in fact contradict it.  There are others that could be discussed such as the distinction between “guilt” and “punishment” that provides the foundation for the teaching about Penance.  If anything I have written here about the crisis invites further consideration, there is a place where this can be done.  The Lutheran church shares in the same catholic heritage you have known that confesses the Creeds, the work of the Spirit in Holy Baptism, and the true body and blood of Jesus Christ in the Sacrament of the Altar.  You will find the catholic practice of the liturgy.  But you will also find teaching based on what Holy Scripture actually says.

I write this in Christian love for my Roman Catholic friends.  The events that are taking place are so terrible, and I have seen from their comments how they have been hurt. If you believe that there are specific reasons that have caused this crisis, then how can love remain silent?

My Roman Catholic friends are of course free to reject any connection between the requirement of clergy celibacy and the present crisis.  They are resourced in views about Tradition that can be used to explain and justify the practice of clergy celibacy, despite what the text of Scripture says.  For all my friends who continue in this way it is my prayer that the truth about these events will be revealed; that your church will stand firm in confessing what God’s Word says about sexuality; and that you will remain firm in faith toward Jesus Christ who died for our sins and rose from the dead. Together we pray “Come Lord Jesus!” as we look for the Day when the crises will be no more, and we will be united as every knee bows and every tongue confess that Jesus Christ is Lord, to the glory of God the Father.