Commemoration of Justinian, Christian Ruler and Confessor of Christ 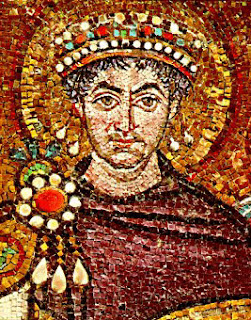 Today we remember and give thanks to God for Justinian, Christian Ruler and Confessor of Christ.  Justinian was emperor of the East from A.D. 527 to 565 when the Roman Empire was in decline. With his beautiful and capable wife, Theodora, he restored splendor and majesty to the Byzantine court. During his reign the Empire experienced a renaissance, due in large part to his ambition, intelligence, and strong religious convictions. Justinian also attempted to bring unity to a divided church. He was a champion of orthodox Christianity and sought agreement among the parties in the Christological controversies of the day who were disputing the relation between the divine and human natures in the Person of Christ. The Fifth Ecumenical Council in Constantinople in A.D. 533 was held during his reign and addressed this dispute. Justinian died in his eighties, not accomplishing his desire for an empire that was firmly Christian and orthodox.

Collect of the Day:
Lord God, heavenly Father, through the governance of Christian leaders such as Emperor Justinian, Your name is freely confessed in our nation and throughout the world.  Grant that we may continue to choose trustworthy leaders who serve You faithfully in our generation and make wise decisions that contribute to the general welfare of Your people; through Jesus Christ, our Lord, who lives and reigns with You and the Holy Spirit, one God, now and forever.