Mark's Thoughts: A brief history of private confession in the Lutheran Church 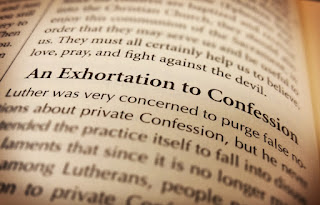 I am currently in the midst of writing the portion of the forthcoming Lutheran Service Book Handbook that will deal with all forms of Confession and Absolution in Lutheran Service Book.  The following a slightly expanded form of the first in a series of four church newsletter articles about private confession that I am writing for my congregation:

It has been noted by a number of scholars that the Lutheran Reformation began at the confession stool.  Although we associate the Ninety Five theses with the issue of indulgences, those indulgences were in fact part of the larger medieval belief and practice called penance, and penance was tied to confession.

At the beginning of the sixteenth century Christians were expected at least once a year to make confession in preparation for receiving the Sacrament of the Altar (usually at Easter).  Christians were also expected to confess when there was the danger of dying because of illness, childbirth, or dangerous travel; when there was someone available to absolve and it was doubtful the opportunity would occur again in the next year; and when they about to receive the other sacraments.  However, confession was not considered to be something repeated on a regular basis except among monks and very pious lay people (the strong link between regular confession and Roman Catholic piety is a product of the Counter Reformation).  In Martin Luther’s Augustinian monastic order he was required to confess once a week.

In confession the priest sat on a chair in the chancel (the confession chair) and the person confessing kneeled before him (the confessional booth was not invented until the second half of the sixteenth century).  The person was required to make a complete confession of sins in order to have a valid confession.  By the late medieval period the Church had developed the teaching that absolution forgave the guilt of sin before God.   However, because God had been offended there was still a temporal penalty that needed to be paid. This temporal penalty was called penance.  If a person did not complete the penance, the absolution was no longer valid.  Therefore priests were taught to assign a very small penance (prayer, fasting and alms were the most common).  However, this meant that the vast majority of the penalty was still owed.  Indulgences, paying for masses and going on religious pilgrimages were some of the ways that this could be addressed.  Whatever had not been taken care of during life, then had to be dealt with by time in the purifying fires purgatory.

In the Reformation, Martin Luther rejected confession and penance as it was practiced by the medieval Church.  He recognized that the idea of doing something to placate God was a rejection of the Gospel and God’s grace.  He understood from his own experience that the requirement for a complete confession was not only impossible, but also was torture for the conscience.

However, Luther did not in any way reject confession because of the absolution that was spoken.  He viewed this as a unique and comforting application of the Gospel. And so Augsburg Confession article XI says, “Concerning confession they teach that private confession should be retained in the churches, although an enumeration of all faults in confession is not necessary. For this is impossible according to the psalm [19:12]: ‘But who can detect their errors?’”

In addition to this kind of confession, there was since the ninth century A.D. a general form of confession in the medieval Church.  The medieval Mass was in Latin.  However, after the sermon there was a brief “service” in the language of the people.  It included a general confession (called the Offene Schuld) and an absolution that was based on the form originally used in private confession around 1000 A.D.

When the Lutheran Reformation was first introduced into an area, the practice of confession in its medieval form was abolished. Then, after time had passed (sometimes as long as a decade), an evangelical (Lutheran) form of confession was introduced. Lutheran churches practiced a new form of confession in which people did not attempt to enumerate all sins and only confessed those they knew and felt in their heart. Then the absolution was spoken.  Christ spoke through the pastor in absolution and having forgiven the sins, there was nothing more for the person to do! In addition, when a person went to confession, Lutherans also used this time with the pastor first as an opportunity for examination – catechesis in the faith.   The pastor made sure that the individual understood the Catechism, and especially about the Sacrament of the Altar.  This was a time of teaching, and was an important tool for catechesis in the early Lutheran church.  The Augsburg Confession states: “Confession has not been abolished by the preachers on our side. For the custom has been retained among us of not administering the sacrament to those who have not previously been examined and absolved” (XXV.1-2).

All Lutheran churches had private confession and people confessed before communing.  This took place after Vespers on Saturday (usually between 12:00 and 2:00 p.m.) and also on Sunday morning before the Divine Service (this time was supposed to be reserved for the aged, pregnant, handicapped and inhabitants of outlying villages, but others also came).  In addition to this, some churches also retained the general confession which could be found either at the beginning of the service or in its traditional position after the sermon. This was the practice in the sixteenth and most of the seventeenth century.  We must understand that while the Sacrament of the Altar was offered every Sunday, this does not mean that individuals communed every Sunday.  In fact the Church Orders regularly provided the instruction for the situation: “If there are no communicants.”  Church Orders also provided exhortations that were to be addressed to the people by the pastor when there were no communicants.

During this period the practice became one in which individuals usually spoke a memorized formula of confession that had been provided by the Church Order of that area and taught by the pastor.  A great challenge was the lack of time: especially on the occasions of the great feasts, pastors faced the challenge of hearing confession from hundreds of individuals in the larger cities.  Wherever people desired to receive the Sacrament regularly (such as the Leipzig of Bach’s day), pastors struggled to hear confession from all who wished to commune. This left little opportunity for the teaching that was intended in the examination. While these problems did exist, “confession piety” was a central feature of Lutheranism.  Confession, the confession chair, absolution, the power of the keys and the confession of sin occupied a large space in prayer and hymn books of the period.
However, during the last forty years of the seventeenth century Pietism complained that private confession did not allow for the heartfelt spiritual discussion with the pastor that it believed was necessary for people to be built up as "real" Christians.  With its great emphasis on a personal and earnest confession, Pietism tended to elevate the confession over the absolution.  Because it did not emphasize doctrine, Pietism did not view catechesis as a goal in confession.  In order to accomplish the purposes of Pietism, pastors instituted the practice of “announcing” for communion at the pastor’s study on a day during the week. Pastors began to speak absolution to people at the Saturday Vespers in a group.  Eventually the Vespers became a confessional service in which a general confession and absolution prepared people to receive the Sacrament (this confessional service is the source of the Rite of Corporate Confession and Absolution in Lutheran Service Book). For a time in many places, private confession and the confessional service existed side by side.  The inevitable result was that the practice of private confession declined.

During the eighteenth century, Rationalism rejected those things that reason could not understand.  The very idea of sin was dismissed and theologians rejected the idea that a pastor could speak absolution in Christ’s place and stead.  It was in this environment that regions of Germany began to abolish private confession altogether.

The practice of nineteenth century German Lutheranism that immigrants brought with them when the LCMS was founded involved announcement to the pastor during the week (often Friday) and then attendance at a confessional service on Saturday before receiving the Sacrament on Sunday.  It must be recognized that at this time, the Sacrament of the Altar was often only celebrated four times a year.

Private confession never completely disappeared from German Lutheranism, even if it became rare. During the nineteenth century in Bavaria, the pastor Wilhelm Loehe worked to re-establish the use of private confession alongside of general confession.  Many of the pastors who helped found the Lutheran Church – Missouri Synod were trained and sent by Loehe.  LCMS pastors continued to defend the practice of private confession against those shaped by American Protestantism and also against charges that it was “Roman Catholic.”

Lutherans have retained private confession and absolution because it is a uniquely comforting means of receiving the Gospel.  As the Apology of the Augsburg Confession puts it:


It is well known that we have so explained and extolled the benefit of absolution and the power of the keys that many troubled consciences have received consolation from our teaching. They have heard that it is a command of God—indeed, the very voice of the gospel—so that we may believe the absolution and regard as certain that the forgiveness of sins is given to us freely on account of Christ and that we should maintain that we are truly reconciled to God by this faith. (Ap. XI.2).

Next: The Blessings of Private Confession