Mark's thoughts: Forgetting about the resurrection? 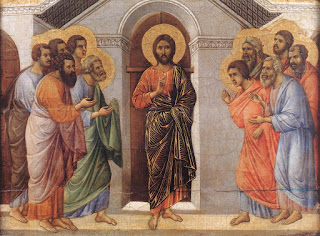 Lutherans are focused on the cross of Jesus Christ and the forgiveness of sins that God has provided through the sacrificial death of the Son of God.  When the apostle Paul writes, “For I decided to know nothing among you except Jesus Christ and him crucified” (1 Corinthians 2:2) – we get it. We know that in the crucifixion of Jesus Christ, God was at work to provide forgiveness to all people.  As Martin Luther states in the explanation to the Second Article of the Apostles Creed, Jesus is the Lord, “who has redeemed me, a lost and condemned person, purchased and won me from all sins, from death, and from the power of the devil; not with gold or silver, but with His holy, precious blood and with His innocent suffering and death.”  On Good Friday, Lutherans love to quote Jesus’ words spoken in the Gospel of John just before he died: “It is finished” (John 19:30).

But of course, Jesus saving work was not finished.  St. Paul certainly knew this.  In the very same letter where he said that he knew nothing among the Corinthians except Jesus Christ and him crucified, he went on to say in chapter 15: “And if Christ has not been raised, your faith is futile and you are still in your sins. Then those also who have fallen asleep in Christ have perished” (1 Corinthians 15:17-18).  Jesus came to bring forgiveness and life – resurrection life.  He came to defeat death and begin the resurrection of the Last Day.  Paul went on to say, “For as by a man came death, by a man has come also the resurrection of the dead.  For as in Adam all die, so also in Christ shall all be made alive.  But each in his own order: Christ the firstfruits, then at his coming those who belong to Christ” (1 Corinthians 15:21-23).

Luther certainly didn’t overlook this fact. He concludes the explanation of the Second Article of the Creed: “that I may be His own and live under Him in His kingdom and serve Him in everlasting righteousness, innocence, and blessedness, just as He is risen from the dead, lives and reigns to all eternity.”  In this statement he ties together the resurrection of Jesus with how Christians now live – something that captures an important truth of biblical theology.

Yet I think that sometimes we do overlook what the resurrection means for our lives as Christians.  I have been struck by this as our Bible classes have been working through a study of the book of Acts.  Certainly the death and resurrection of Jesus for the forgiveness of sins is not absent in Acts, and its companion volume Luke.  After the resurrection the Lord Jesus says to the disciples, “Thus it is written, that the Christ should suffer and on the third day rise from the dead, and that repentance and forgiveness of sins should be proclaimed in his name to all nations, beginning from Jerusalem.” When Philipp encounters the Ethiopian eunuch and shares the Gospel, eunuch is reading and puzzled about a text form Isaiah chapter 53 (Acts 8:30-34) – the premiere text in Scripture that teaches the vicarious atonement.

But on the whole the apostles in Acts do not focus on explaining the meaning of Jesus’ death apart from the basic fact that it gives the forgiveness of sins.  Instead, they proclaim the fact that it happened and then place greater emphasis on the resurrection of Jesus and how they are witnesses to it. In Peter’s sermon on Pentecost he only spends one verse talking about the death of Jesus (Acts 2:23).  Instead, he spends the rest of his time declaring that God raised Jesus (2:24), that David had prophesied this in Psalm 16 (2:25-31) and that the disciples were witnesses of this resurrection (2:32).  Paired with the resurrection, Peter stresses the ascension and exaltation of Jesus (2:33-36), because the events of Pentecost bear witness to the exaltation of Jesus.

Something very similar happens in the next chapter when Peter again talks about the death of Jesus (Acts 3:14-15) but spends more time talking about how they are witnesses (3:15) that Jesus has risen (3:13, 15), and that it is the ascended Lord who will return (3:19-22).  Speaking before the Sanhedrin Peter again declares that though they killed Jesus (Acts 5:30), the disciples are witnesses (5:32) that God raised (5:30) and exalted Jesus (5:31).  In speaking to Cornelius and the Gentiles Peter says that Jews killed Jesus (Acts 10:39) but that God raised him and made him appear to the disciples (10:40-41).

The same thing is found in the second half of the book of Acts as the attention shifts to Paul.  In his first recorded sermon at Psidian Antioch (which parallels Peter’s first sermon at Pentecost), Paul says that the Jewish leaders unknowingly fulfilled Scripture when they asked Pilate to execute Jesus (Acts 13:28-29). Then he declares at length that God raised him (13:30), that Jesus appeared to them who are now witnesses (13:31) and that this fulfills Scripture (13:32-37) - in particular Psalm 16 (13:35-37).  In his speech at the Areopaus in Athens, Paul doesn’t even mention the death of Jesus. But he does say, “The times of ignorance God overlooked, but now he commands all people everywhere to repent, because he has fixed a day on which he will judge the world in righteousness by a man whom he has appointed; and of this he has given assurance to all by raising him from the dead” (Acts 17:30-31).

It is the resurrection of Jesus that propels the apostles forward to declare the forgiveness found in Jesus the risen and exalted Lord.  Their confidence is based in the fact that God raised Jesus.  Not only did he raise Jesus, but he exalted the risen Lord to his right hand in the ascension.  Faith in Jesus receives forgiveness.  This forgiveness was won on the cross, but it is given out by the Lord who is alive and reigning – the Lord who will return in glory on the Last Day.  Though ascended, Jesus has not abandoned his Church.  Instead, the Spirit poured out on Pentecost is the Spirit of the risen Lord.  Christ continues to be present and at work through the Spirit.

This confidence of the apostles is our confidence as well.  Jesus lives and reigns!
In his resurrection Jesus Christ has defeated death.  He has begun the resurrection of Last Day that will be ours.  He won forgiveness for us and he continues to deliver it to us through his Means of Grace.  Through the same Means of Grace he continues to be present with us.  He is present through his Spirit in the reading and proclamation of his Word.  He is present through his Spirit as we are baptized into his death.  He is present as he says, “I forgiven you all your sins” through the called servant in his Office of the Holy Ministry. And he is uniquely present in his true body and blood of the Sacrament of the Altar, given and shed for us. In each celebration of the Service of the Sacrament we sing the words of the Sanctus: “Blessed is he  who comes in the name of the Lord.”  Because Jesus Christ has risen from the dead he does … and he will.