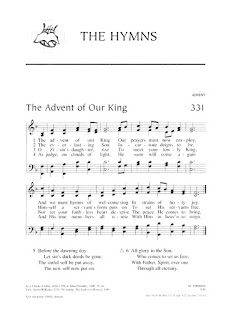 We are frequently told that the rite of the Divine Service and the hymns of the Lutheran hymnal are not welcoming to visitors.  Instead, if the Lutheran church is to be “missional,” something different is needed.  Almost always this something turns out to be some form of “contemporary worship” in which the texts and even the basic ordering of the Lutheran church’s rite are abandoned for an order of service that has been created by the worship planner and contains little connection to the catholic character of worship in the Lutheran church.  Lutheran hymns are cast aside for various praise songs which, like the order of service, are projected onto large screens.  Leading all of this is the ubiquitous “worship team” displayed prominently in the chancel/stage area in front of the congregation.

Now it is true that the rite of the Divine Service is often new and foreign to people who visit.  This is not surprising.  In fact, it is a good thing.  Christ has called the Church out of the world and made her his own.  Lutherans confess that we know the Church is present when the Means of Grace are being administered.  The Church is most herself when she is in worship, and therefore she looks very different from the world when this is occurring.

The Church has her own catholic culture – her own ways of speaking and acting – that separates the Church from the world and marks her off as God’s people. In the rite of the Divine Service these ways are made up of verses and phrases taken from Holy Scripture. The rite of the Divine Service is made up of Scripture and it has been built around the reading and proclamation of God's Word and the celebration of the Sacrament of the Altar.  It highlights and emphasizes the sacramental ways in which God comes to us and is therefore the best and most natural setting for these Gospel gifts.  The rite of the Divine Service is a very important part of this culture that marks off the Church as God’s own people who have been called out of the world and continue to receive his gifts.  As visitors encounter the rite of the Divine Service, they will often experience something that they find to be different and foreign to them.  This is not surprising because they are encountering a different way of doing the world – God’s Gospel way.  However in this recognition there is an invitation to learn more about God’s way of doing the world and to join the culture of God’s people.

Setting this point aside, the assertion remains that Lutheran worship using rite and hymns from the hymnal is less user friendly than “contemporary worship.”  Yet this is a myth that does not correspond to reality.  I was struck by this again recently when I was present at a service that incorporated elements of contemporary worship.  There was a song that the congregation was to sing in alternation with the worship team.  I immediately recognized that this was not something I had ever sung or even heard before.  All I had before me were the words of the text.  There was no musical notation of any kind.

The worship team performed their part in a manner that was done flawlessly.  The expressions on their faces clearly indicated that they were deeply involved in the music.  Yet when it was time for the congregation to sing, I realized that I had no idea how to sing it. I flailed uncomfortably in my attempt.  The bare words provided no assistance in how the piece was to be sung. There was nothing “user friendly” about it.

The music for the the rite of the Divine Service and hymns in the Lutheran hymnal may be new to a visitor.  But the hymnal carries a distinct advantage over contemporary worship: It provides music that helps guide the user.  Proponents of contemporary worship will argue that in the twenty-first century this is no longer really a factor.  They will claim that declining music literacy in our culture means that neither the presence nor the absence of music is a significant feature.

But this argument is overplayed.  True, music literacy has declined.  But if you add up all of the individuals who are or have been in grade school, middle school and high school band, orchestra and choir programs the result is a very large body of people with at least a rudimentary knowledge of music. At the very least you have people who know that the dots go up and down in ways that tell them the tune is getting higher and lower.  It may be new and different to them.  But the presence of musical notation makes the settings and hymns of the Lutheran hymnal easier for the visitor to use.