Mark's thoughts: Which Bohlmann do we remember? 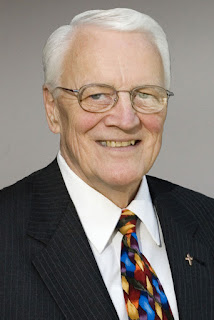 The recent death of LCMS President Emeritus Dr. Ralph Bohlmann has prompted many to recount his service to the Lutheran Church –Missouri Synod.  He has been lauded as a true churchman, and in particular his faithful stand during the contentious 1960’s and 1970’s has been praised.

It is natural that in death we attempt to remember the good about a person.   In Dr. Bohlmann’s case there certainly is much to recount as he helped the LCMS to remain faithful to Scripture and the Lutheran Confessions during a crisis in our history.

But we are not helped in our understanding of the present if we are not also honest about the past.  As we look back, the question must be raised: Which Dr. Bohlmann are we remembering?  Dr. Bohlmann was president of the LCMS from 1981-1992.  During this period, a different Dr. Bohlmann emerged.  I was not a pastor during these years (finishing college in the last year of his presidency).  However, during that period I heard much about what Dr. Bohlmann was doing.  My grandfather, Dr. Raymond Surburg, was on the faculty at Concordia Theological Seminary, Ft. Wayne, IN and during our many visits to see the grandparents I heard about the increasingly liberal approach that Dr. Bohlmann was pursuing.  Indeed, it is not without reason that conservative and confessional Lutherans were thankful that Dr. Alvin Barry defeated Dr. Bohlmann in 1992 and became the new LCMS president.

The decade that followed the walkout and its aftermath was an important one for the LCMS in helping to chart the trajectory that has brought us to where we are today.  Dr. Bohlmann’s leadership was a significant factor in this.  This must also be remembered.  And so I was very interested to see the piece that Dr. Matthew Becker wrote on his blog about Dr. Bohlmann.  Dr. Becker was, of course, removed from the roster of the LCMS because he has long publicly advocated positions that are contrary to the biblical faith.  His assessment of Dr. Bohlmann and the description of their interaction provides a needed balance to the recent discussion.
Posted by Surburg's blog at 8:10 AM