Mark's thoughts: A sermon on 1 Cor 13 that summarizes 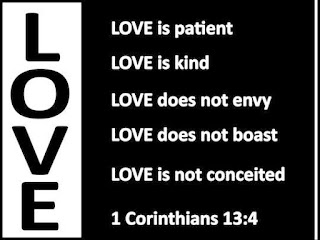 During the last three years I have written blog posts that deal with the topic of the Law, exhortation and preaching.  What has always made this topic so engaging is its importance to the life of the Church and the preaching that goes on in her midst.  This is not an abstract subject of theological argumentation, but rather an intensely practical one that speaks directly to the Christian life.  Naturally, the position I have advocated appears in my own preaching.  However, this past Sunday’s sermon on 1 Cor 13:1-13 turned out to be a sermon that uniquely summarizes in a brief fashion the position I have been discussing:

When I first started to drink wine, I only liked white ones.  I was happy to drink white zinfandel, Riesling, or gewürztraminer.  I was fine with chardonnay if that was served.  But I did not like red wine.  I didn’t want any part of it.  The taste was just too strong and I couldn’t understand how anyone could find that enjoyable.

But somewhere along the way, things changed.  I can’t even remember when or how this took place. But I do know that during the time I have lived in Marion, I have even come to prefer red wine.  I enjoy a merlot, a shiraz or a cabernet sauvignon. What used to seem too strong, now seems like a robust wine that I enjoy more than the lighter white ones.

And admittedly this was part of the reason I wasn’t a huge fan of this chapter.  It is read at wedding after wedding where frankly, Jesus Christ really isn’t in the picture.  In this setting, the chapter is heard as a paean about romantic love – a celebration of the love that the couple has for one another. It’s enough to make one gag.

But there was also a deeper reason that I was not really a fan of 1 Corinthians 13.  And this reason is that I considered it to be nothing but law.  As our catechumens have learned, the law is what we must do; the Gospel is what God has done for us in Christ.  The law tells us what we must do.  And when we find that we don’t do it perfectly in thought, word and deed, guess what?: The law has just shown us our sin.

I mean, listen to what Paul says this morning: “Love is patient and kind; love does not envy or boast; it is not arrogant or rude. It does not insist on its own way; it is not irritable or resentful; it does not rejoice at wrongdoing, but rejoices with the truth. Love bears all things, believes all things, hopes all things, endures all things.” Who can possibly measure up to that?  Are you always patient?  Are you always kind? Of course you are not. Do you ever envy? Are you ever rude?  Do you ever insist on having your own way?  Of course you do.  We all do.  Talk about concentrated law! There is no doubt, when you compare your life to Paul’s words, you will find that you are a sinner in need of forgiveness.

Yet over time, I began to realize that there is more to this chapter than just an expression of law that shows us our sin.  Like red wine, it is true that what is here is strong.  But that is not only a negative thing.  Instead, like when a red wine is appreciated, there is in fact a robust and substantial flavor present that is very good.

1 Corinthians 13 is in fact an interlude in the midst of Paul’s discussion that runs from chapter twelve to chapter fourteen.  In this section, he is discussing how the Corinthians should view the gifts that the Spirit provides to the congregation.  Many Corinthians wanted to focus on those things that called attention to the person.  In particular, they were enamored with speaking in tongues.

Now you can read a lot of scholarship about what Paul is referring to when he talks about speaking in tongues – and I have.  But let me save you the effort and give you the short version: we aren’t really sure what Paul is describing.  There is no way to know if it was anything like what now takes place in charismatic churches of the so called Pentecostal movement.

What is clear is that these tongues could not be understood apart from someone providing interpretation.  Therefore Paul instructed that no one should speak publicly in the worship in a tongue unless someone was there to whom the Spirit had provided the ability to interpret.  If not, speaking in tongues doesn’t do anyone any good.  Paul says that prophecy is to be preferred because it serves to build up the church as it speaks God’s word in an accurate and authoritative way.

The Corinthians want to focus on the showy gifts.  These are the ones they consider better. Along with this, we know from earlier in the letter that they consider themselves to have great spiritual knowledge.  So in the verse just before our text Paul writes, “But earnestly desire the higher gifts. And I will show you a still more excellent way.”

Instead, the more excellent way is the way of love.  Paul speaks about love and what it does.  But everything that he says is built on one thing.  In his second letter to the Corinthians Paul wrote: “For the love of Christ controls us, because we have concluded this: that one has died for all, therefore all have died; and he died for all, that those who live might no longer live for themselves but for him who for their sake died and was raised.” Christ’s love for us in giving himself as the sacrifice for our sin – in delivering himself to God’s judgment as our substitute – serves as the foundation for everything that Paul says in chapter thirteen.  Or as he expressed it to the Romans, “For while we were still weak, at the right time Christ died for the ungodly. For one will scarcely die for a righteous person—though perhaps for a good person one would dare even to die—but God shows his love for us in that while we were still sinners, Christ died for us.”

Jesus’ love for us was not just something he said. It was not just something he felt.  It was something that he did. It was an action – an action of service. The almighty Lord humbled himself to play the role of the servant.  Paul told the Philippians: “Have this mind among yourselves, which is yours in Christ Jesus, who, though he was in the form of God, did not count equality with God a thing to be grasped, but emptied himself, by taking the form of a servant, being born in the likeness of men. And being found in human form, he humbled himself by becoming obedient to the point of death, even death on a cross.”

This is what Jesus Christ did for you. But he didn’t just die.  On the third day, the Holy Spirit raised Jesus from the dead.  And now through the Word and baptism you have received the same Spirit.  The Spirit has caused you to be born again – regenerated. Through baptism you have shared in the death of Jesus the risen One. And because of the Spirit who raised Jesus, already now the power of Jesus’ resurrection is at work in you.  Paul told the Romans, “Do you not know that all of us who have been baptized into Christ Jesus were baptized into his death? We were buried therefore with him by baptism into death, in order that, just as Christ was raised from the dead by the glory of the Father, we too might walk in newness of life.”

This means that now your life is one of faith working through love.  This love is Christ’s love for you, received by the work of the Spirit, and now passed on to others.  Jesus is the source, and so this life of love looks like Jesus.  Paul says that this love is patient and kind toward others. It does not envy or boast. It is not arrogant or rude. It does not insist on always having its own way.  It does not provoke others just to do it.  It does not rejoice at wrongdoing, but rejoices with the truth. This love bears all things, believes all things, hopes all things, endures all things.

Do we do this perfectly? No.  There will always be reason for repentance – always reason to return to the water of our baptism and the forgiveness we find there.  But at the same time as we are nourished by the Means of Grace, this also becomes something that we want to do.  The Spirit who raised Jesus from the dead is at work in you.  He has made you a new creation in Christ – he has created the new man in you. And that new man wants to walk in the way of love.  He wants to walk in the way of Jesus. That’s why you hear Paul’s words and think, “Yes, that’s what I want to be.”

So is there law in 1 Corinthians chapter thirteen? Yes.  Does it show you your sin? Yes, it always will. But at the same time it also describes how you now want to live because of Jesus’ death and resurrection for you. This desire does not come from you.  Instead, it is the Spirit who raised Jesus who gives it to you.  It is the new man he has created within you who sees in these words a description of the life you want to lead.  And as you hear these words today, the Holy Spirit uses them to put the selfish old man in his place so that you can share the love of Jesus Christ with others.