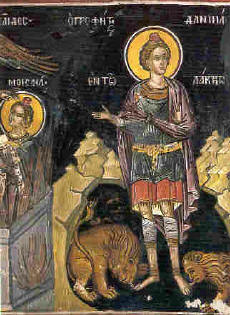 Collect of the Day:
Lord God, heavenly Father, You rescued Daniel from the lions’ den and the three young men from the fiery furnace through the miraculous intervention of an angel.  Save us now through the presence of Jesus, the Lion of Judah, who has conquered all our enemies through His blood and taken away all our sins as the Lamb of God, who now reigns from His heavenly throne with You and the Holy Spirit, one God, now and forever.