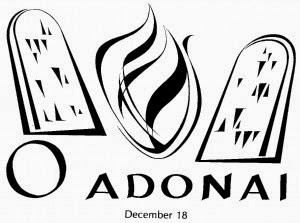 The Great “O” Antiphons were sung before and after the Psalm at Vespers during the last seven days of Advent.  They were used to create the hymn “O Come, O Come, Emmanuel,” which is the Hymn of the Day for the Fourth Sunday in Advent: Rorate Coeli. The “O” Antiphon for December 18 is:

O Adonai and ruler of the house of Israel, who appeared to Moses in the burning bush and gave him the Law on Sinai:

Come with an outstretched arm and redeem us.
Posted by Surburg's blog at 9:16 AM