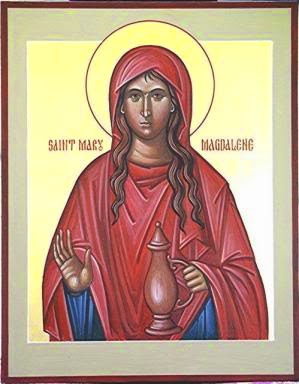 Today is the Feast of St. Mary Magdalene.  Mary Magdalene followed Jesus after He had cast out seven demons from her (Luke 8:2).  She was present at the crucifixion (Matthew 27:55-56) and was one of the women who went to the tomb on Easter Sunday to anoint Jesus’ body (Matthew 28:1-10).  According to the Gospel of John (20:11-18), Mary was the first to see the risen Lord and He sent her to deliver a message to the apostles.  Although the Western church has at times identified her as the penitent prostitute (Luke 7:36-50) or as the sister of Martha and Lazarus, there is no biblical basis for these identifications and the Eastern church has treated them as three different women.

Scripture reading:
Now on the first day of the week Mary Magdalene came to the tomb early, while it was still dark, and saw that the stone had been taken away from the tomb.  So she ran and went to Simon Peter and the other disciple, the one whom Jesus loved, and said to them, “They have taken the Lord out of the tomb, and we do not know where they have laid him.” … Then the disciples went back to their homes.  But Mary stood weeping outside the tomb, and as she wept she stooped to look into the tomb. And she saw two angels in white, sitting where the body of Jesus had lain, one at the head and one at the feet. They said to her, “Woman, why are you weeping?” She said to them, “They have taken away my Lord, and I do not know where they have laid him.” Having said this, she turned around and saw Jesus standing, but she did not know that it was Jesus. Jesus said to her, “Woman, why are you weeping? Whom are you seeking?” Supposing him to be the gardener, she said to him, “Sir, if you have carried him away, tell me where you have laid him, and I will take him away.” Jesus said to her, “Mary.” She turned and said to him in Aramaic, “Rabboni!” (which means Teacher). Jesus said to her, “Do not cling to me, for I have not yet ascended to the Father; but go to my brothers and say to them, ‘I am ascending to my Father and your Father, to my God and your God.’” Mary Magdalene went and announced to the disciples, “I have seen the Lord”—and that he had said these things to her.  (John 20:1-2, 10-18)

Collect of the Day:
Almighty God, Your Son, Jesus Christ, restored Mary Magdalene to health and called her to be the first witness of his resurrection.  Heal us from all our infirmities, and call us to know you in the power of your Son’s unending life; through the same Jesus Christ, our Lord, who lives and reigns with You and the Holy  Spirit, one  God, now and forever.