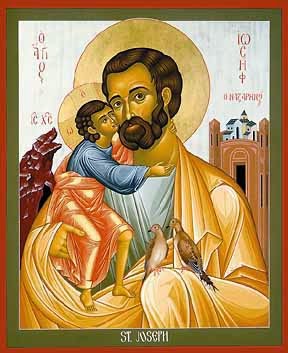 Today is the Feast of St. Joseph, Guardian of Jesus.  St. Joseph has been honored throughout the Christian centuries for his faithful devotion in helping Mary to raise Jesus.  Matthew’s Gospel tells us that Joseph was a righteous man, who followed the angel’s instructions and took the already-pregnant Mary as his wife (Matthew 1:24).  In the Gospels, Jesus is referred to as “the carpenter’s son” (Matthew 13:55).  This suggests that Joseph had building skills with which he supported his family.  He followed the angel’s instruction in taking the Mary and Jesus to Egypt in order to escape Herod the Great’s murderous plot (Matthew 2:14).  Joseph last appears in Scripture when he and Mary faithfully take the twelve-year-old Jesus to Jerusalem for the Passover (Luke 2:41-51).  Joseph, the guardian of our Lord, has long been associated with caring parenthood.


Collect of the Day:
Almighty God, from the house of Your servant David You raised up Joseph to be the guardian of Your incarnate Son and the husband of His mother, Mary.  Grant us grace to follow the example of this faithful workman in heeding Your counsel and obeying Your commands; who lives and reigns with You and the Holy Spirit, one God, now and forever.